Skip to content
One of our sponsors, Phottix presented a challenge. Given the number of lights we use in cosplay shoots, would it be possible to utilize the ultra portable setups of Phottix to replicate the same effects? I mulled about it for a bit, then shot them back an email with a wishlist of stuff I might need for a shoot like this.
Check out how we did this shoot after the jump.

Of course, being the obsessive-compulsive, I listed down more gear than I would actually use, and just wanted to make sure. From their end, due to the equipment’s popularity, not all were available for the shoot. So the final list of gear we had at our disposal was as such:

Weather is a friend, foe and monkey wrench all rolled into one. Outdoor shoots like these are reliant on good sun and timing. On the day of the shoot, we were blessed with sunlight, and a partially overcast sky towards the afternoon. The hard part about shooting in this situation though is getting cut short every now and then whenever the sun would hide behind patches of clouds. You just can’t get the proper consistency all the time. All you could do is wait and be alert when the opportunity to shoot comes. 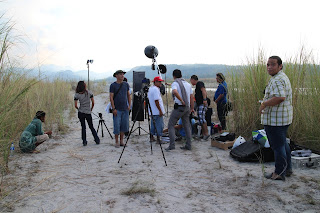 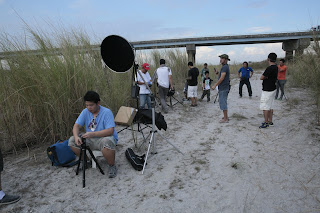 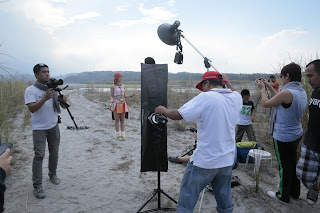 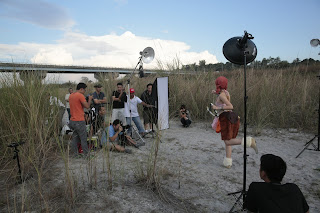 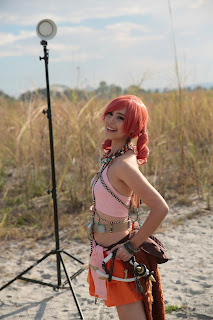 Thanks to Borj and friends for taking these behind-the-scenes images of the shoot.
I’ve always wanted to do Final Fantasy cosplay shoots, but costume design was one of the factors that held me back. Some were just too complicated given time pressures we had. But I was lucky enough to have met Jessica Ouano, a local cosplayer who already had a Vanille costume made a couple of years back. She was gracious enough to have it brought over from Cebu (since she’s based there) by her brother.
The biggest challenge here is finding that perfect balance between the strobes, speedlights and the sun. The latter being a wild card, things get unpredictable. As a rule of thumb though, I usually measure for the strobe’s power and then adjust for natural light using only the shutter speed settings. My aperture is kept steady since that is the only factor that strobe lights are concerned. That way, your strobe-lit areas are ironed out, and the natural light becomes the overall fill for the rest of the image. A good dash of patience would also help.
The location we chose is the lahar area within the Clark Development Zone property. This was coordinated through my good friend Borj, who is one of the professional photographers in the area, and a regional contact for Canon Philippines as well. He was kind enough to take time off from his day job, and accompany us in the sand quarry / lahar area for the day.

This lighting setup approximates what we used during the shoot. Given the PSD file I downloaded didn’t have Phottix-looking products, I had to opt to using the traditional icons you would see in a studio setting. The PPL-400 carried the brunt of the lighting chore, while the Mitros speedlights were used for fill and highlights. I chose a beauty dish, since it can produce hard shadow lines on a model’s face, duplicating the same effect of a bright sunny day. Why not use natural light then? Well, this is one light I can control. A bit on its left is a strip box setup armed with a Mitros.

Positioning highlights can be tricky. The “thickness” of the highlight depends on the angle where the light is hitting your model’s sides. To make the highlight “thinner”, you had to move the light more to the model’s back and make it face you. The downside is, there’s an increased chance of flaring, especially if you’re using a wide focal length. You could however place the lights further out, but that would diminish its power significantly. They would hardly make dent against sunlight. If you place the lights more on the side, it may come to a point that it’s no longer a highlight, but interferes with the effect of your key light. I used a Hydra reflector and a second beauty dish to maximize the output from the speedlights.

The first hour proved to be premature in the shoot. Sunlight was just too strong for the strobes to counteract. We had to wait until it was about 4:00PM before we got good registration on the model’s body. Not to mention, the sun was more yellowish by this time giving skin tone a bit more life.

The sun by the the way is behind the model to her left, which was a welcome coincidence. Not only that it helped the case for the highlights, but it also provided that “back flare” look I wanted to achieve for the final finish of the image. This had to be tempered down with an extended hood care of strips of illustration board and my palm.

Of course, this is just 50% of the final image. The Clark location provided the best base backdrop for Vanille, but we needed elements to make it appear it was Gran Pulse. Given our penchant for collaboration, we tapped 429 Studios as the CG partner to provide us the digital assets to add into the background. I sampled various sky shots during the shoot itself and got the best formations of clouds and blue portions.

Ryder then cleaned up and composed the image accordingly.

A full length video of this tutorial would be made available during the DPP 7 Anniversary event in Bonifacio High Street, so do check out the Phottix booth there! I think they’re giving away the DVD with my face on it, unfortunately. Hahahaa.