I was fortunate enough to get to work with Rachel again before she went back to Canada. One shoot was for FHM, and the other was rather a spur-of-the-moment arrangement which resulted in a revisit to a genre I haven’t work on for quite some time.

After our FHM shoot (which would come out in August), we stayed a bit longer and did an extra layout using the white background in Shutterspace Studios. The lingerie Rachel brought with her reminded me of those pin-up girls, and hence I got to experiment again with this lighting setup.
When I finally got the chance to work on this image, I called Rachel and fixed up another session just for doing this pin-up concept.

Pin-ups is a classic sexy genre I loved to do even before I dabbled into shooting cosplay. It was an avenue where we could show above average skin without having it veer into the raunchy territory.
I take most of my inspiration from a notable pin-up artist, Alberto Vargas. The first thing I would notice right away is how artists, particularly painters would “light” their subjects. I look at point of contrast and where the shadows fall vis-a-vis their highlights. Pin-up style lighting appears to be semi-harsh. You know there are strong shadows, but they’re not as sharp as spot lights. Plus, spotlights would tend of taper off quickly and so the rest of your image would darken out. You need a small light source that would get you that shadow, but at the same time give a bigger light footprint much like how softboxes perform. The closest replication I used is a silver-reflected 22″ beauty dish. Ideally, the best lighting modifier for this style would be a mola light.
Also, an important factor in getting a genre right is casting. As much as make-up and styling play a role in shifting a model’s look, their natural features would always be the base of any appearance. I wanted to capture the stereotype look for pin-ups, hence the immediate need for me is to look for a model with strong caucasian features. That’s where Rachel fits the bill perfectly. 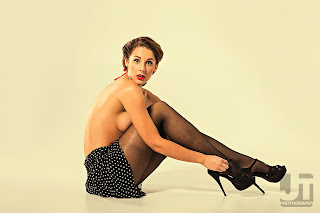 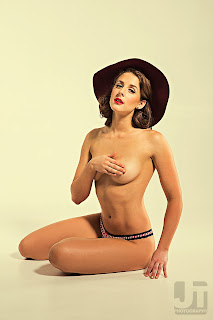 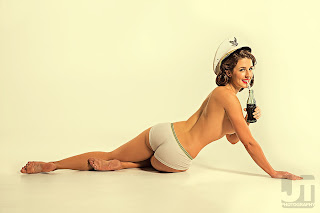 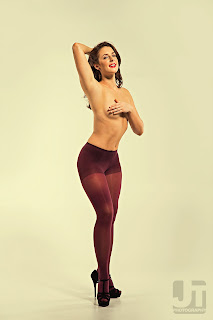 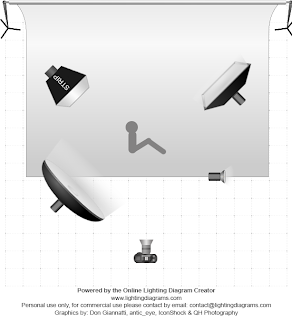 A factor in achieving the look is having the beauty dish aimed the at broad-side of the face. So if the model is looking at camera right, the light should be then on the camera left side. Let the white ambient reflections give you the thin specular highlights on the other side of the model’s body.

Just because you have lights, it doesn’t mean that you could replicate the same kind of studio lighting conditions everywhere. Every new venue would always have a unique reaction to light.

Ambient reflection refers to the light as it bounces from the walls, ceiling, and  floor — practically anything found within range of your lights. Though not as strong as directly reflected light through silver or white reflectors, it does play a significant factor in the overall lighting of your subject.

This ambient reflection was crucial for this shoot since the white background was reflecting hints of highlights on the model. You don’t need an extra strobe fired just for this function (and I think it would just come out as an overkill).  I also needed that overall-lit effect to even out the light on the entire shot.