Skip to content
First time I saw a Mola was in 2 Stops Brighter Studios, two years ago when we did our first cosplay shoot in the US. The owner, Philip Stark (I wonder if he’s related to Tony…) was swearing by it. He was volunteering it to me on one of the layouts, but I never used the opportunity. I never bothered considering on getting one until a recent trip in Singapore (International Cosplay Day). They had one in the studio, so I took the chance on some of the images.
This year I finally relented and ordered one from B&H Photo. Assembly took awhile, and it was in a similar fashion of putting together Ikea furniture. But after an hour of getting the logic of the nuts and bolts, my Mola was ready to use.
The Mola’s construction is unique compared to your run off the mill beauty dish. The bowl isn’t the usual smooth contour, but rather in a “wobbled” fashion. This makes the light even out from the center to the edges. Also gives a nice taper as the light falls out.

I brought out my other beauty dishes and compared the Mola’s construction and shape against the AlienBees White, Silver dishes and the RimeLite Silver.
The design of the Mola is quite unique on several fronts:
It wasn’t until a week after it arrived that I got the chance to work with it. (Holding on to the EQ here). To test it out, I got my latest muse Kristine as a guinea pig of sorts. Good thing she was happy enough to oblige. 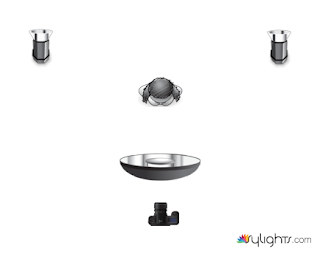 The Mola is actually placed on a boom looming overhead in a Paramount formation vis-a-vis the model. There are two back lights firing against either a white wall or backdrop. You could optionally put gobos behind the strobes to prevent them from spilling over the highlights on your model. Adjust according to taste. I also placed styrofoam underneath the model to get additional bounce, but the diagram doesn’t have an image for it.

It has an optional diffusion sock that can be placed if you find the light still too harsh on the face.
What I didn’t bother buying in the set is the grid, since I already have that on my other silver Alienbees beauty dish. I have the Mola on the option of a more white and softer throw.

Make-up: Noel Flores
Styling / Production Design: Raffy Tesoro
Model: Kristine Dinglasan
Now, I’m not going to re-invent the wheel. There are other photographers out there who have experimented with various effects of a beauty dish. Not all dishes are made the same way, and this review looks into the various construction and its effect in the final light throw.
My next few blog posts would be using the Mola extensively, and in a variety of formations.