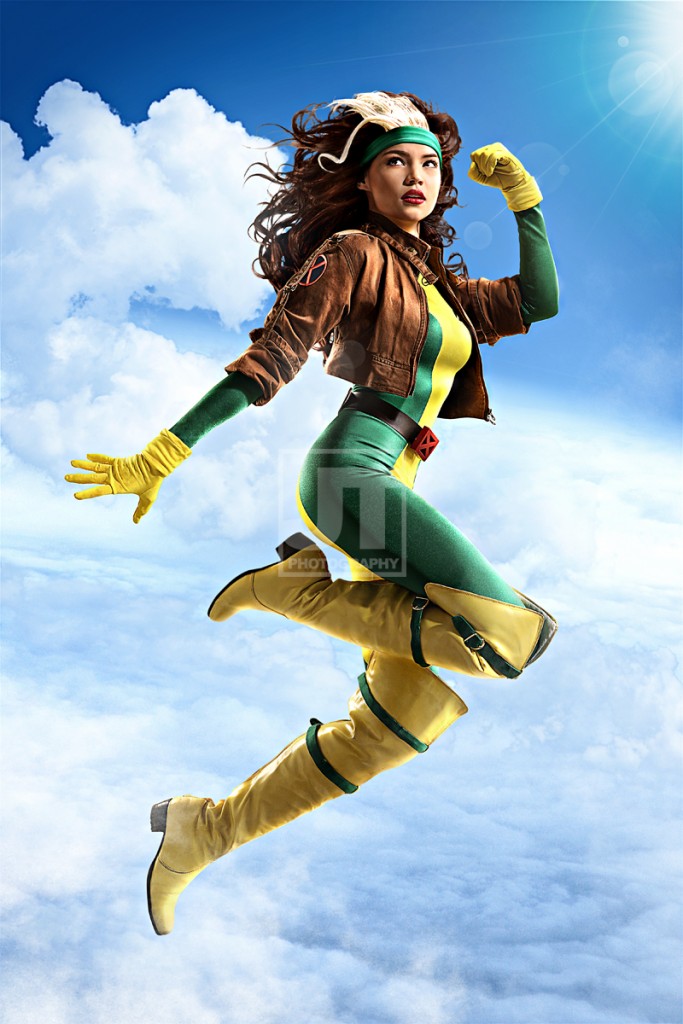 Shooting cosplay came from two polar creative fronts: my frustration of illustrating and love of photography. Back in high school, I was one of those doodling kids who wanted to draw what I read in the comics. The stuff I used to read were several Marvel X-Men titles and Batman. What resulted out of it were crash courses through summer art school and glorified stick figures. I also left several unused easels and drawing boards in the wake of my pursuit.  I slowly came to accept that I couldn’t draw, but somewhat had an eye for graphic design. I knew how to put together pieces of a creative puzzle but couldn’t make them on my own. I dabbled as the art director in our school publication but it was in college when the camera was first introduced to me.

My cousin was taking up weekend photography classes in another nearby university and would often bring home sheets of paper to develop alongside the manuals. Started reading them on the side, learning the process of developing film in the darkroom. From there, I stared saving up for a camera through side projects I used to do as graphic / web designer. The shutterbug firmly bit when finally got an apprenticeship with a family friend. I guess the rest is history.

My journey in photography certainly wasn’t a straightforward one. It’s a series of glass ceilings after another – often seeing the next potential yet can’t seem to get there. It was that frustration that led me to start searching for my own handle in taking pictures. I had to ween off making bad attempts copying how other photographers light their images. I had to own my pictures. How became the biggest question.

It wasn’t until I was shooting for several years when I thought of putting together my love for comics and anime with photography. I started to get drawn to images entailing certain levels of production design. The bigger, grander, more complicated… the more I welcomed the challenge. I started referencing inanimate objects (e.g. dolls, mannequins, etc…) into our early work. When we finally got to mount my second exhibit “Pop Nostalgia” with the Crucible Gallery in 2009, I had an inkling pop culture was becoming my anchor for creativity.

Just like how I dabbled with graphic design, it had parallels with my photography. I wasn’t really good at generating my own ideas, but learned how to reference more known genres and imagery. I didn’t even know about the term “cosplay photography” until a couple of years after. That was when people started calling our work as such. Personally, I just wanted to give homage to pop culture icons of my youth.

Regular pictures of people in costume was out of the question. We wanted to push the imagery, to bring it back to full circle, blurring the lines between a picture and an illustration. This came about several trial and error experiments for a few years partnering up with advertising creatives.  The body of work during these early years produced a variety of results, but never the full satisfaction of accomplishment. There was big room for improvement, and that feeling of “what-if” always lingered after every shoot was done.

In 2010 was perhaps when we stumbled upon a milestone when we produced this mash-up interpretation of Tim Burton’s version of Alice in Wonderland called, “The Tea After Party.” It was only then when we had a resemblance of synergy between photography, make-up, styling, set design and post production. Of course we still regretted a lot of things we wished could’ve been done, but that’s already a lingering frustration from every work we do. It was from this image where a dramatic shift in our current style has stemmed from.

Having past experience in publishing and advertising prior to photography proved to be valuable as we started to streamline the thought process of coming up with cosplay shoots. It wasn’t enough to come up with one-hit wonders and then forgetting how the process was done. We wanted something that can be repeatable. Creativity energy is preserved and targeting towards a particular goal.

Every advertising shoot doesn’t push forward without a pre-production organizer. It can come in various formats, but the most common is a PowerPoint presentation.  If we are to follow a full-blown version of such a deck, it would contain the following:

This pre-production organizer is the heart and soul of the shoot. This sums up the current progress and the checklist of things to be done before anything gets done.

This is one aspect of commercial shooting we strive to introduce into cosplay photography. This level of organization funnels creativity from a spray into a powerful hose targeted to achieve one image. When everybody is uniformly briefed about the concept, the team is put into one focus.

Taking these factors in, it may seem to be complicated for any newbie to start shooting cosplay, but it all boils down to solving one problem at a time. As each problem is solved, the process becomes clearer. When you finally come up with an image, repeat this method until you get the hang of going through the creative routine.

It took our team several years before we have developed a system of coming up with cosplay shoots, and it is still far from perfect. But the advantage of having one is following a logical flow of solving a creative problem of coming up with an image.

Sharing below some behind the scenes of our past shoots over the years.