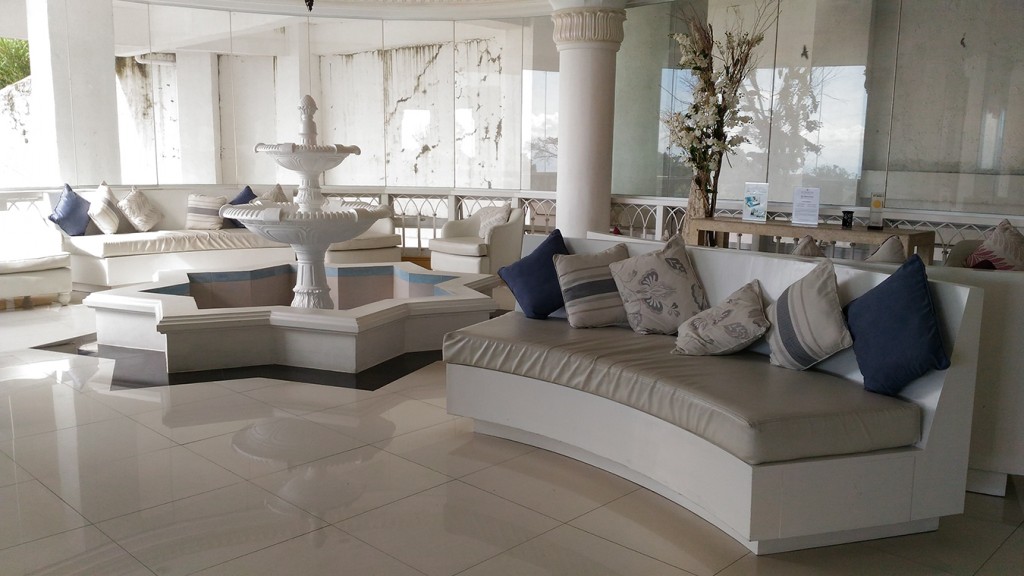 Every now and then I would write stuff on food and travel when I feel like it, so this is one of those articles.

It was one of those sudden clutch trips friends decide to take over the weekend. Surprisingly alot of the usual hotels were booked, but good thing we found this one having a vacancy. Estancia has been that one of those hotels with an interesting facade along the highway. It seemed to be a long-time fixture on every Tagaytay trip, but I never bothered checking the place out until now.

The facade (which I didn’t get the chance to take a picture) has that Greek vibe to it, but such motif only lasts until the lobby. The rest of the place though was decent-looking but totally off-design with the architecture that greets you when you first arrive. Not a deal-breaker especially if you’re just after a good night’s sleep. It was just a bit weird seeing Swiss (?) chalet exteriors in the lower floors.

We arrived rather late, and their restaurant seemed like ghost town. Famished from the trip, we took the chance of still ordering. Unfortunate for me, the food they served was half-cooked, though it was quickly replaced with another full set of the meal I ordered this time a bit on the burnt side. It’d gladly take the latter over something raw any day.  Food in the restaurant was something you’d find in any typical Filipino grillery place. I was a bit disappointed expecting something that matches the facade at least.

One thing noticeable though is that the staff don’t seem to be well-trained enough in the finer points of hospitality. They go about their assigned tasks and are quite pleasant, but you wouldn’t see anybody going out of their way to please guests. A simple gesture of asking the bill in their restaurant, one waiter would tell you nicely that it’s not his job to give you the bill. He then gingerly points his hand towards a co-worker.

The property is actually sprawling down the mountain side and passes through several properties through the back. It is big, and you have the option to take a golf cart to your room. Too bad it was only until 10PM, and we didn’t make it by the time we finished late dinner.

The rooms were spacious and toiletries were abundant I would have to say. It’s enough to fit in six (6) people if you’re really pushing it. But everything in the minibar has a charge, even the water. I was tempted to walk on the highway and stumble upon the nearest 7Eleven, but I was too tired to even bother. The chips on the minibar would suffice.

If there was one thing about accommodations for me, breakfast must not suck. Breakfast was their saving grace fortunately. Food was mostly a mix of typical Continental and Filipino dishes. I sort of gave up looking for anything Greek-related at this point, and I don’t really mind if it’s not in theme.  The omelettes and French toast eventually outweighed my disappointing experience with their grilled salmon the night we arrived.

If you don’t mind ignoring the finer points of hospitality then this place is pretty decent. I would recommend this to a younger crowd coming for a swim, get plastered in their rooms and wake up to recovery food the following morning.