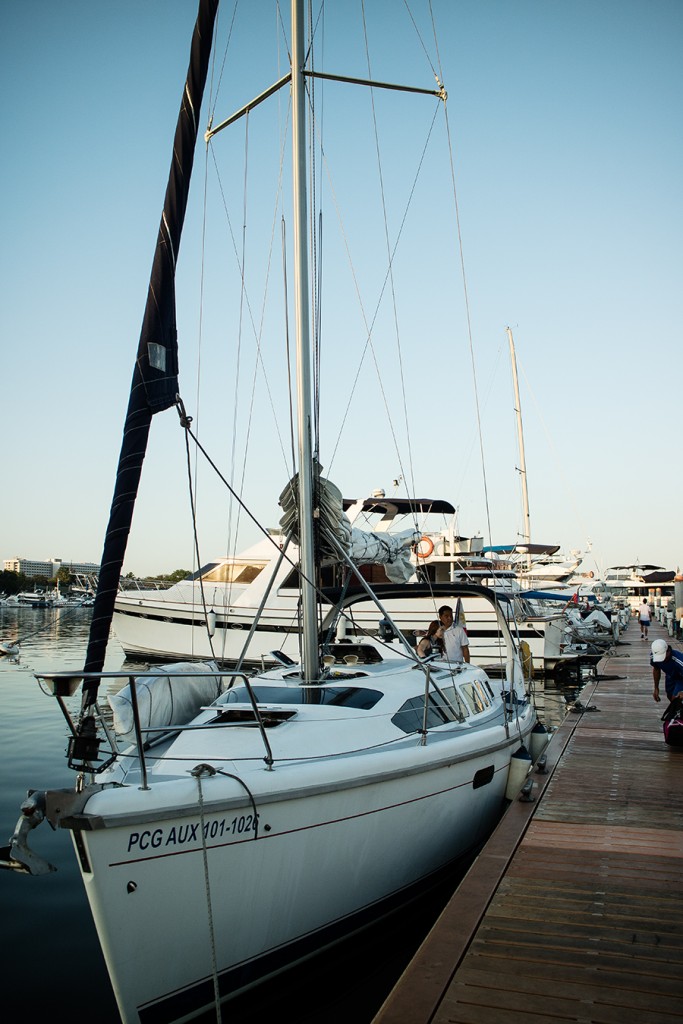 When you say you went on a cruise, most would imagine riding this big ocean liner for weeks around the Caribbean. This trip may not be feeding to the grandeur of the stereotyped imagination, but this beats out such trips out of the poignant charm and sheer novelty. It came as a random idea from a good friend, who just wanted sail on a yacht out of the blue.  After some research over the net, we found a fluke listing in AirBnB. The wife decided to get in touch with the boat owner (whom we fondly call Tito by the time the trip ended). I would say fluke since he was the only sailboat listed so far in Manila, but I think this would grow given the popularity of his sailing trips as other boat owners might follow suit.

Our basic itinerary was Manila to Pico de Loro, use the beach and sleep in the boat, then back to Manila the following morning. It was pretty straight forward, but the journey there made for good natural entertainment.  We left Manila Yacht Club around 630AM. The sailing time to Hamilo Coast took about six (6) hours, and we were just along the coast most of the time.  There was a brief lesson as we passed this fortified rock, Fort Drum. From afar it looked like a cement battleship. The American forces during the colonial period (1909) thought of putting cannons and guns around this tiny piece of land thinking that along with Corregidor, this would serve as a line of defense for any invaders coming from the sea. This proved quite futile come World War 2 though, when the Japanese attacked by air, which left both fortified islands like sitting ducks.

Funny how you could notice the demarcation line of Manila Bay’s polluted water from the odor to the color.  By the time we passed Corregidor island, the welcoming smell of the open sea started to take over. It was just fresh air and blue water from that point on. I would suggest sitting on the deck instead of going below the cabin for most of the trip. Not only for the relaxing view but it also helps with sea sickness. Seeing a horizon gives you a reference point from all the bouncing happening on the boat. We had a couple of hitches along the way like sea plants getting stuck in the propeller (it still has a motor even though it runs mostly on sails), which was normal.  It was quite entertaining seeing the crew go about their jobs too raising the main sails, and even diving behind the boat during those seaweed encounters.

Side note: As it turns out, his boat has been popular for quick night cruises around Manila Bay, usually for engagement announcements and fireworks viewing.

Hospitality was more than what we expected. We were prepared to rough it out given the circumstances, but the service we got was veering towards subtle luxury. They have a set menu for the entire trip, but they ask for your preferences too.  We also brought snacks to nibble on, and board games to pass the time while anchored in Pico de Loro for the night. Just imagine playing Jenga here. But Boggle, Exploding Kittens and Werewolf were the blockbuster hits until we got too sleepy to play.

Bring a jacket for the evening as the sea breeze can get chilly. We tried sleeping on the upper deck but since the wind got too cold for us, the beds were more than welcome. The following morning was spent with breakfast and freshening up back at the beach before leaving for Manila. The trip going back took longer because of the head wind, so we had to rely on the motor more.  The waves were choppier too, so our trip wasn’t complete without getting wet from the ocean spray.

We arrived back at the Manila Yacht Club around 4PM, which was more than enough time to settle back to normalcy when we got home.

Highly recommended and a great way to spend the long weekends instead of the clogging the usual vacation spots.  Check out Victor Roman’s AirBNB listing if you want to take your own personal cruise around nearby beaches and coves.