Skip to content
Some time ago I posted behind the scenes from our Jubilee cosplay shoot.
Well, here’s the final product. This was combination of several images and empty background options. Ryder thought of combining the first running pose and against an optional oblique angle background, which resulted in a unique perspective of Jubilee dashing with her powers out.
The light effects were 50% CG and 50% practical photography effects. For the lights, I got an illustration board, and punctured it using a flat screw driver, creating crossed-star patterns. I then covered a strobe with it, aimed towards the camera, and fired.

We then lifted the starlight material in Photoshop and placed it in the final layout. The smoke was old shots we had as well, and it was made out of smoke coming from mosquito coils (katol) and a smoke machine.
Of course, there’s no 100% perfect pose off the bat for this one. Bea had to repeat the poses with lots of options of facial expressions and slight body movements. We also had her hold her position and the coat was separately flown, so we could get material to merge with the desired image we would choose as base. 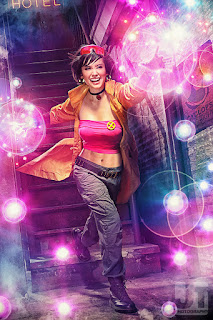 It was just that geekily giddy feeling when your model actually comes out looking like the character you envisioned.
The artist who did the original cover also featured the image in his blog. How cool is that? 🙂