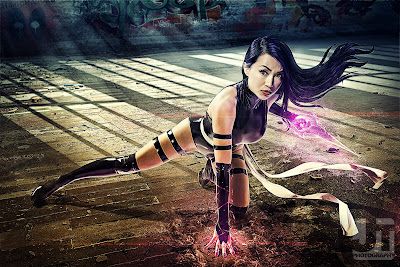 This is the 3rd time we’ve shot a Psylocke cosplay, and somehow there’s always something we learned on each attempt. 3rd’s a charm, and this time it’s Linda Le, a well known cosplayer in the US.

A. Shoot Proper
This was a few days before San Diego Comic Con, and I was fortunate enough to find a studio within the Mira Mesa area (north of San Diego) to rent for the entire day.
The owner Dave, is just a cool and laid back guy to deal with. It feels like home shooting at his place.
I used four (4) strobes for this setup, and one (1) silver reflector. The main light (beauty dish) is hoisted on a boom so it can be tilted down with hitting the light stand, and give ample space for us to work in underneath. It’s supported with a small softbox fill light. On the upper left corner, you have a strobe with a regular reflector attached. Finally on the upper right, is a large softbox to provide a softer highlight on Linda’s camera right side. The diagram maker unfortunately doesn’t have the model in the same pose as Linda.
In my previous entry about the 70D, I talked about how important the location is in the overall lighting effect; this shoot is a case in point. Since the floors and walls were also white, they were acting as additional reflectors, although weak and softened. This was still enough to illuminate certain sections of Linda without the need of additional strobes.
The strobe placed in the corner left (upper left in the diagram) provided that defined shadow effect on the floor. I would have to admit that was a happy coincidence, or else we would’ve had to replicate a shadow using her main body as outline, which is either a hit or miss. The smaller the light source vis-as-vis the subject straightens the light as it travels, producing a more uniform source. The softbox on the right side on the other hand is a larger light source, hence the light rays tend to scatter in various directions before it hits the subject. That produces a softer highlight.
How thick or thin a highlight is, regardless of light quality is also determined by the angle it is placed against the subject. The more a light is placed at the back, the “thinner” the highlight you get. The more to a side, the “thicker”, but it also runs the risk of affecting your main light if placed too much on the side.
B. Material Photography
After the con (and back in Manila), I started looking for viable backgrounds to place Linda in. It just so happens that an events venue was being torn down in our neighborhood (which I heard is being turned into a branch of McDonald’s as of writing). Over a short span of time, it became a skater’s playground, and a venue for students rehearsing dance routines every afternoon. The floor boards left behind quickly rotted because of the nonstop rains, and graffiti artists didn’t waste time marking their territory. 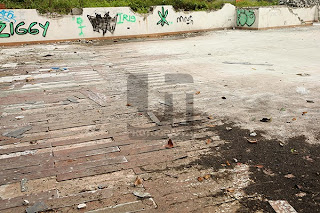 I also took the liberty of going around nearby areas looking for interesting graffiti painted on the walls as additional background textures. 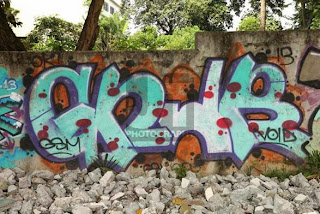 The next challenge is, how do you produce the “Psyblade” effect? 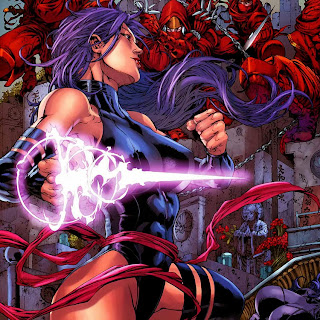 For those who are familiar with audio and production techniques in radio, there is a term called a “foley”. It’s the reproduction of everyday sound effects enhanced in movies, or television by using substitutes. If there was something like that in sound, I figured there has to be a corresponding way in photography. Call it an illusion or what, but I would personally name it “visual foley” for the sake of discussion.
How do we realistically translate a drawn effect into a photographic medium? The Psyblade is basically made up of two (2) textures: a sharp blade end, and a wispy smoke trail. The blue-violet color could always be done in post, so that’s not a factor in looking for its visual foley counterpart. Bottomline, it looked like a swirling combination of water and plasma.
Few things came into mind for the wispy trail: 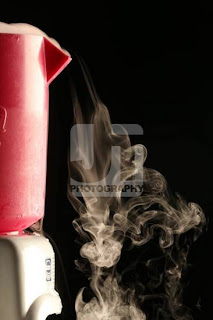 All of which had the same properties of that kind of smoke; it’s the crawling trail versus puffed versions from other sources. When shooting for special effects, make the best of the situation, and produce as much material as you can by shooting in various angles or in this case, placing the smoke in various physical states.
It also became useful in placing the smoke in various sections of the image to further enhance her mutant powers.
You could also use splashed water in mid-air as material as well if you want to have more visceral feel on the blade edges.
As for the sharper end, one element right away: 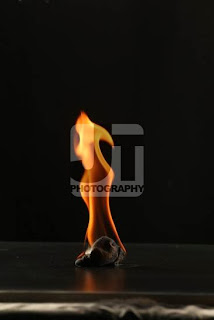 The sharpness and shape of the blade could always be controlled in Photoshop through the liquify tool.

C. Post Production
Prior to everything, I had to make sure that my background shot, and Linda more or less aligned in perspective. This was achieved through good ‘ol trial and error. I basically shot alot of background bending my back in minute angles and just keep on shooting away. Painful, but somebody has to do it.
Though if you want to be scientific about it, you could always use high school trigonometry in solving for the angle of tilt, as long as you have the distance between you, the subject, and the height for your camera placement.
But such in this case, I guess I was able to find a lucky shot that more or less is within acceptable perspective when matched with Linda.
We also sampled various hair shots from other takes and combined the ones we liked into the base image. The cut off arm and legs in the shot is A.J., our overall 1st assistant, and hair stunts guy. He learned all these things during the day itself. Hehehe. 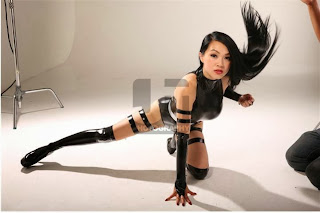 It was up to Ghani’s innate talent in getting the hair wave like the one you’d find in the upcoming X-Force Psylocke Kotobukiya statue. 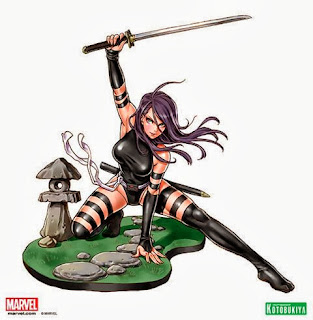 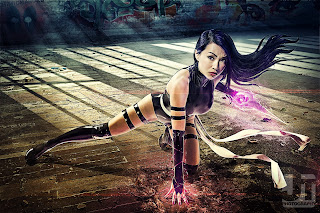