Skip to content
This is the nth time Jinri and I have worked on a folio shoot, but you would never tired working with this babe. She’s always a trooper in doing something new.
I’ve been adding this Asian-inspired vintage look to my shooting repertoire and it stemmed out from shooting Jinri for her calendar. I thought of exploring this look further in the next few shoots and see where we could evolve in this style.
Now, one way to hone your skills is actually to put a handicap on what you plan to do for the shoot. In this case, we limited the frame to just doing a beauty / head shot story. Adding a fashion layout would have thrown the creative direction off track. I wanted to practice beauty shots for this session, and didn’t want any other genre to affect our thought process. This meant all my shots were at most, half-body. My lighting concentration is locked on the face and hair.

The very first image had minimal color grading. This is almost what we got from the camera. The next four images ran through the same workflow with tweaks on the kinds of colors overlaid on top and their respective intensities. By the way, my working aperture was 2.8 to get that natural shallow depth of field. I just exaggerated the blurs in post.

These two images are actually consecutive shots, but her slight adjustment on the shoulders made a huge difference in impact. I personally like the 2nd one in terms of pose, while the 1st for the color grading I did.

As much as we have some lined up pegs and prepared concepts as guides, the shoot itself is free-flowing. Adhering to the pegs is not necessary, but it does serve as a starting point. Much like thinking outside of the box. You can’t think outside without knowing the bounds of the box first.


Here’s one confession (during a fun shoot): I never do the lighting formation up until make-up is more or less at 75% completion. It’s hard for me to imagine the final look without seeing the elements coming together. I take glance at the model’s make-up, look at the wardrobe and/or props involved, only then I come up with a specific setup. Even that isn’t even 100%. There are shoots where I drop the entire thing I thought of and do something completely new — much to the frustration of my lighting crew at times.

Initially Jinri proposed doing some Japanese fashion magazine covers, which I gladly obliged since it is not something I get to do often. But then during the shoot, it somewhat mutated into a vintage feel with the styling and production design. I thought of patterning the lighting on this instead.

I jury-rigged a triflector with available styrofoam in the studio. My main light is an octobox placed in a Paramount setup hoisted behind me. Two (2) lights flanked both sides and are aimed to the ceiling. What I ended up with is a flat frontal light with slight highlights depending on the pose. The ceiling bounce lights provided that highlight on the shoulders — given the ceiling is painted white. The more she tilts her head up, the more prominent the highlights become. 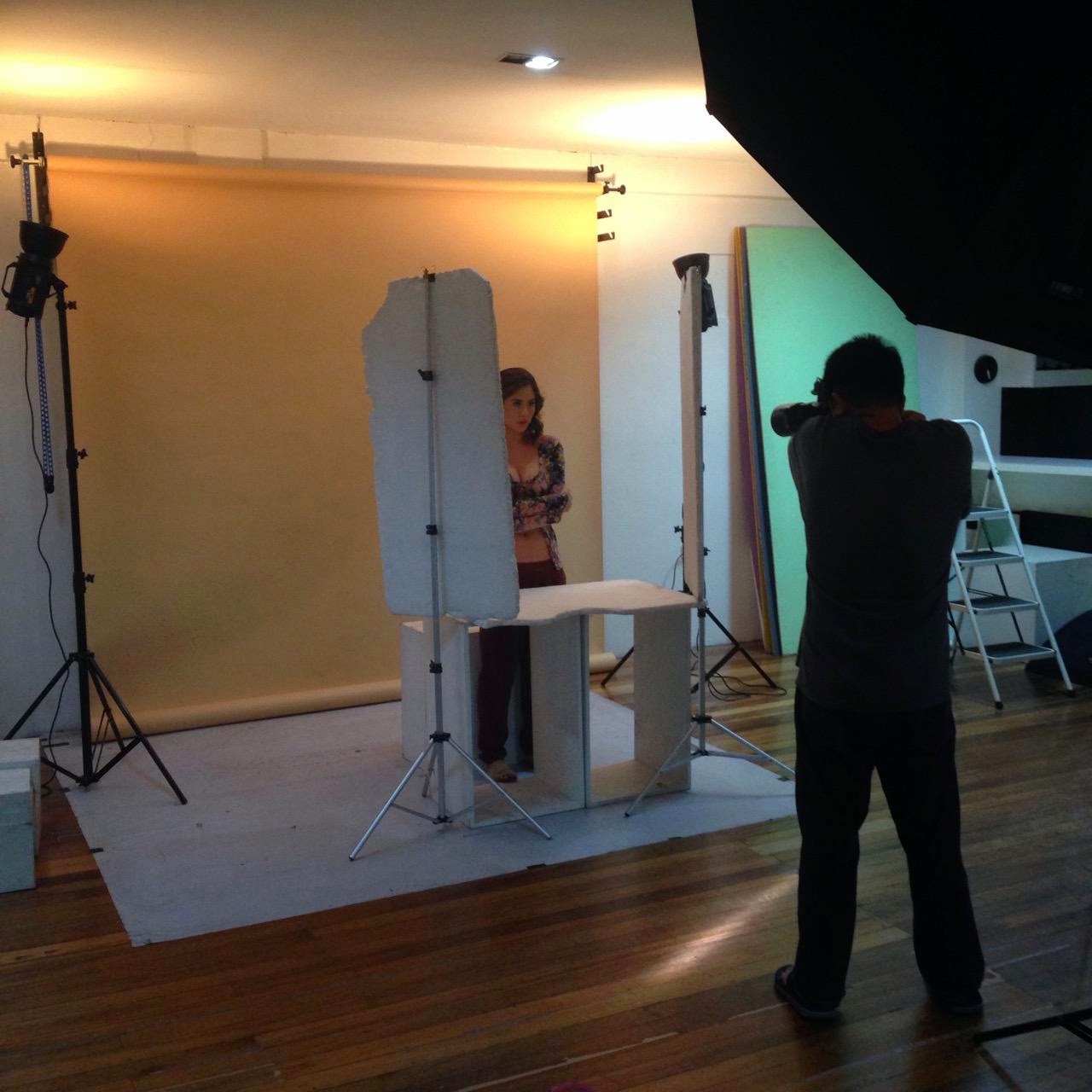 For the sake of uniformity, and I guess something of a habit I picked up doing editorial shoots, the post production for all the shots follow one workflow. This was one thing I have been letting go for the past test / portfolio shoots. Since I intentionally let go of saving any recipes or workflow on a specific shot, no two images ended up having the same treatment. The downside to this though, you can’t have me replicate the exact same look anymore if we happen to hit a particular “look” jackpot. 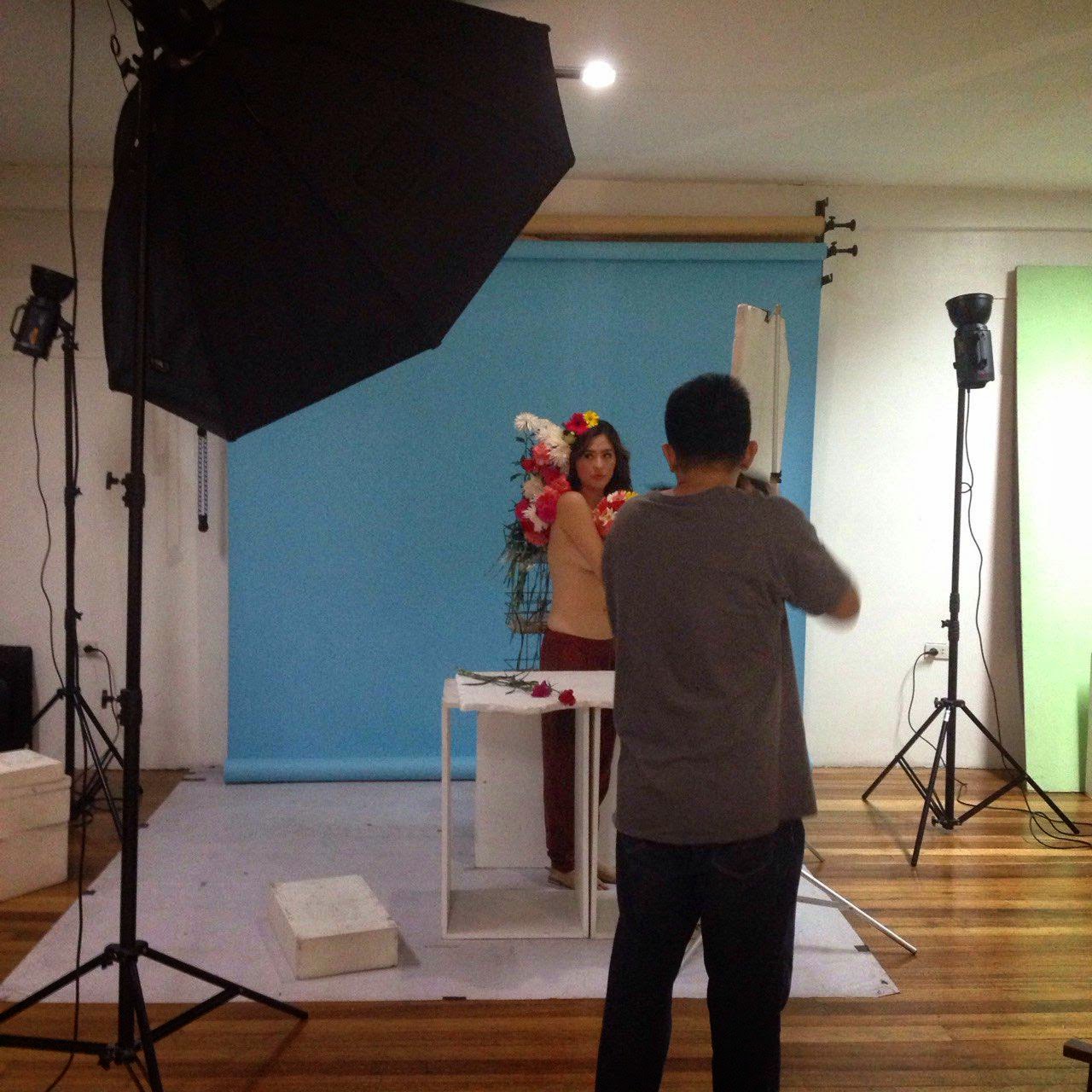 The 2nd lighting setup was just a modification of the first. Jinri’s favored angle is her right so the main light was placed on my left flank, lighting up her right broadside. The re-positioned bounce is placed behind the other acting as a highlight bounce. This gave a very soft light, with a slight difference between the lighted and shadow parts of the shot. It was an almost evenly lit image without having too flat a side.