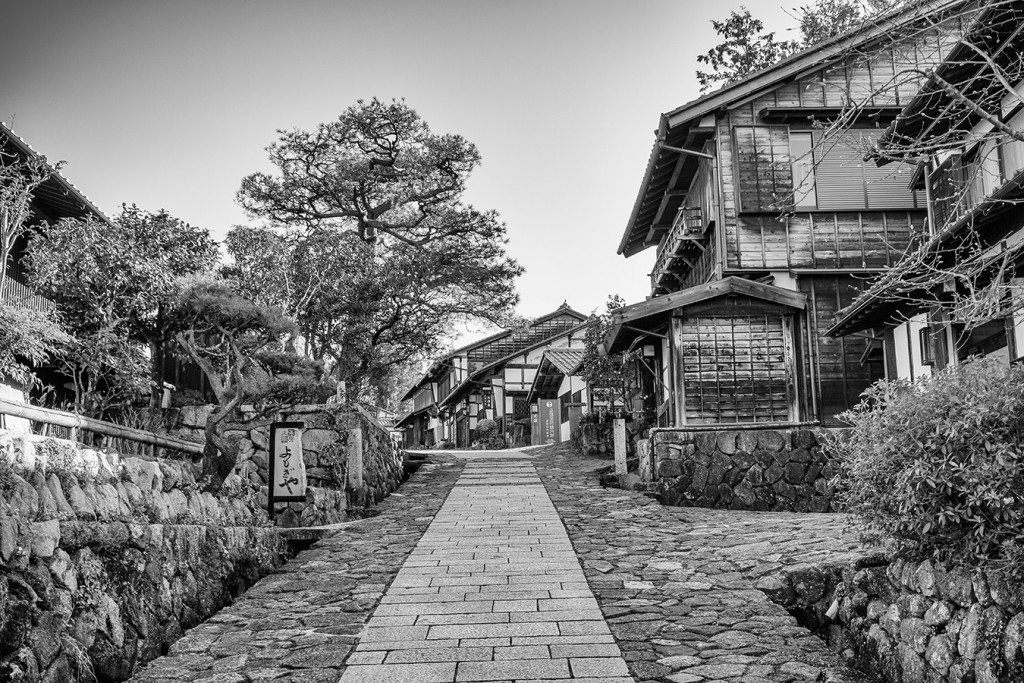 Nakasendo is one of the old foot highways that connected Kyoto to Tokyo during the Edo Period (Tokugawa).  While the rest of the known highways modernized into Shinkansen and/or highway routes, certain parts of Nakasendo was preserved and became a popular walking trail for locals and tourists. The notable section is between Magome and Tsumago, which is the bulk of this blog post. I would touch on others sections of the trail (e.g. Nagiso, Ochiai, and Nakatsugawa), but it would be best to research them outside of this.

Given my knack of anything Japanese (from history to anime), it was quite a shame that I’ve never heard of Magome until I came across this article in Philippine Star published some time ago. It recounts the adventures of the author backpacking in Japan (with their schedules wrecked because of a typhoon), and then arriving in Magome only to find the town closed early for the night. Bottomline, they were saved by Ate Cheng, a pinay running a local ryokan with her Japanese husband. Now as much as it was an interesting anecdote to read, I quickly dismissed it as one would skim through several of these stories along your Facebook feed.

My decision to visit the Nakasendo Highway came from a totally unrelated source. In all of the things it (FB feed) has been spewing out, articles ranging from what kind of person you are based how to tie your shoes to cats going crazy over cucumber placed on their side, a gem comes up every now and then.  I got fascinated by his photos and told myself that my next trip to Japan should cover this route. Since the Holy Week break was coming up, it was an opportune time to travel with the wife again. When I started booking for accommodations, one of the postal towns we’re slated to stay in was Magome. A booking website described languages spoken by the host, alongside English and Japanese was Filipino. That piqued my curiosity, since it was quite a rarity having Filpino as a spoken language in the middle of rural Japan.  That’s how I eventually made the connection between Ate Cheng’s place and the Nakasendo Highway.

Travel Tip: We arrived via Tokyo, and took the Shinkansen to Nagoya. In hindsight, we could’ve just taken a straight flight to Nagoya, but we have plans to see stuff in Tokyo after this hike anyways. So if you’re just going for Nakasendo (or other parts in Nagoya), it would be best to land in Nagoya to save yourself of the Shinkansen costs. 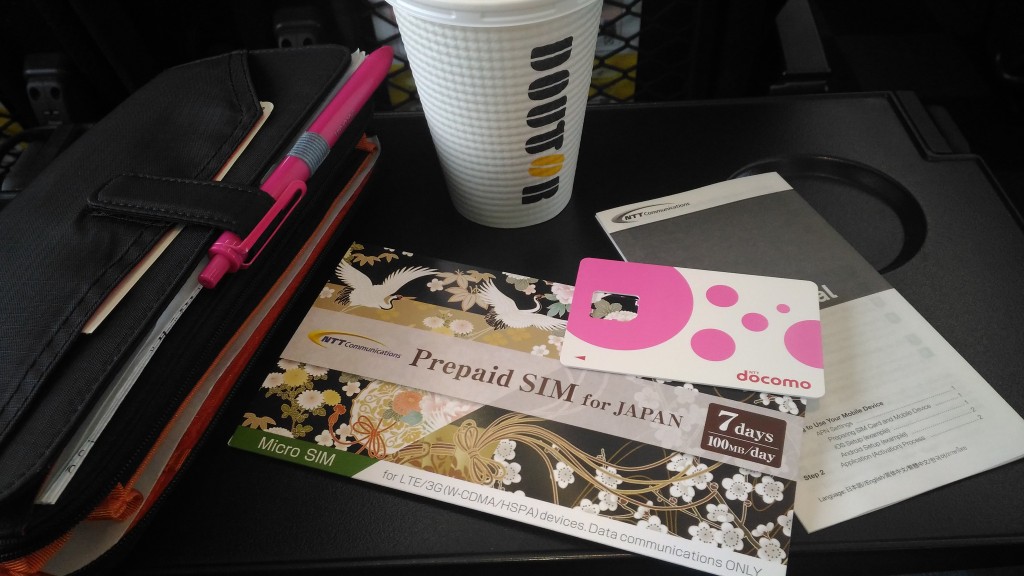 Our adventure began after leaving Nagoya for Nakatsugawa station. You can take either JR Shinano (more expensive but faster) or the Chuo Line (longer, but cheaper). We ended up using the Chuo line out of an impulsive decision seeing Nakatsugawa as the stated terminal station on the overhead display. It was a pleasant ride nonetheless, and the seats were configured for longer trips. We arrived at Nakatsugawa station a bit before 10AM, and hung around the nearby convenience store for the next bus to Magome to arrive. A local bus leaving off Curb #3) would take you up along a winding mountain-side road, past several stops to the terminal station at lower entrance of Magome town proper. 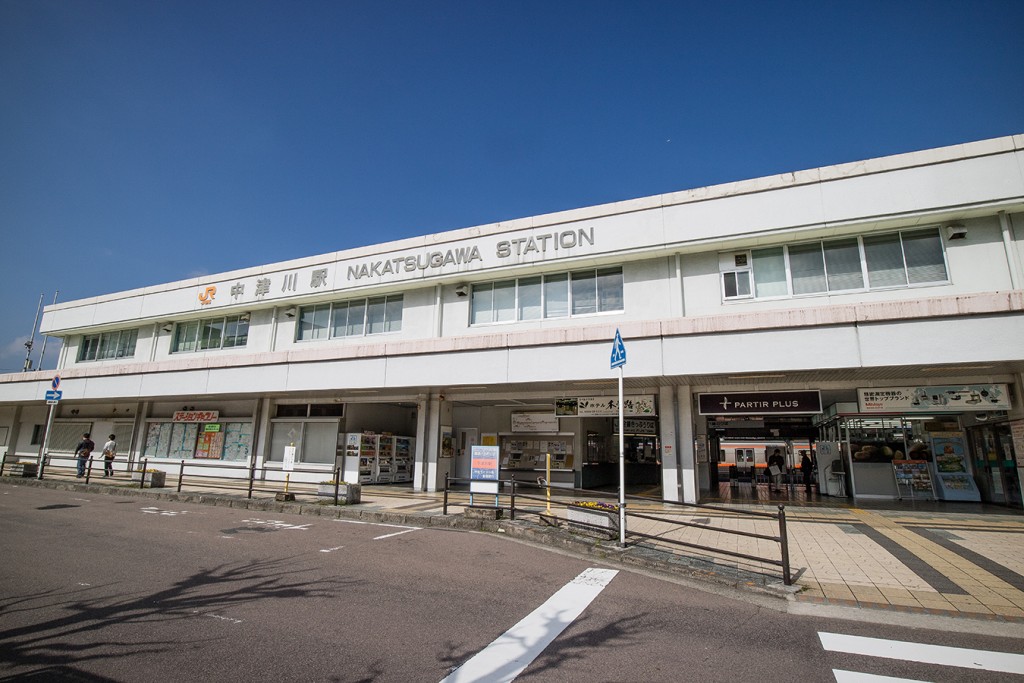 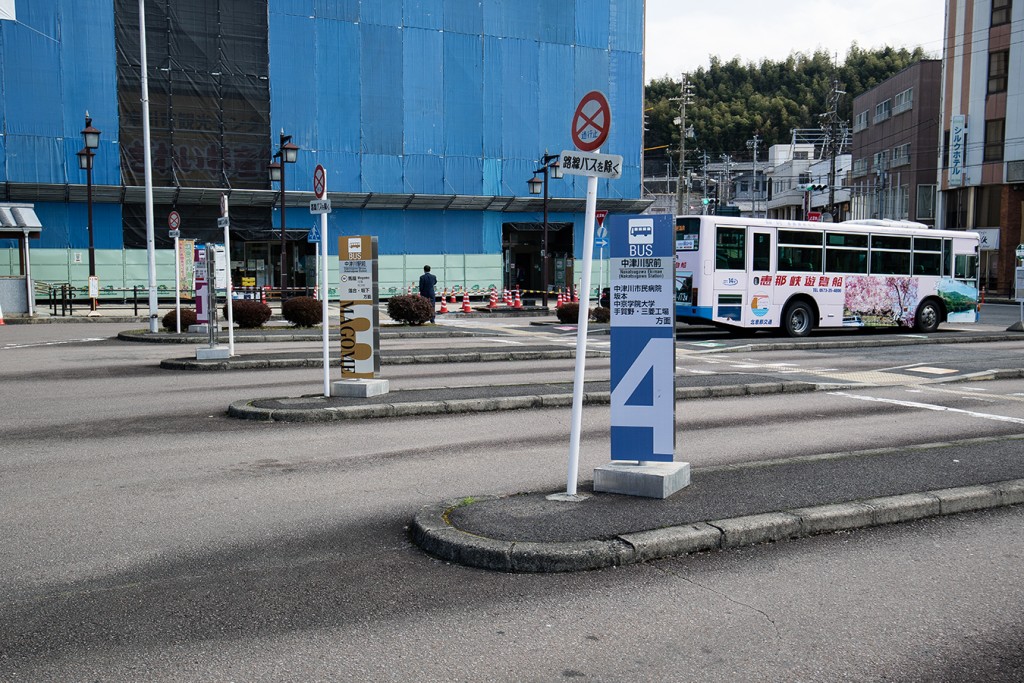 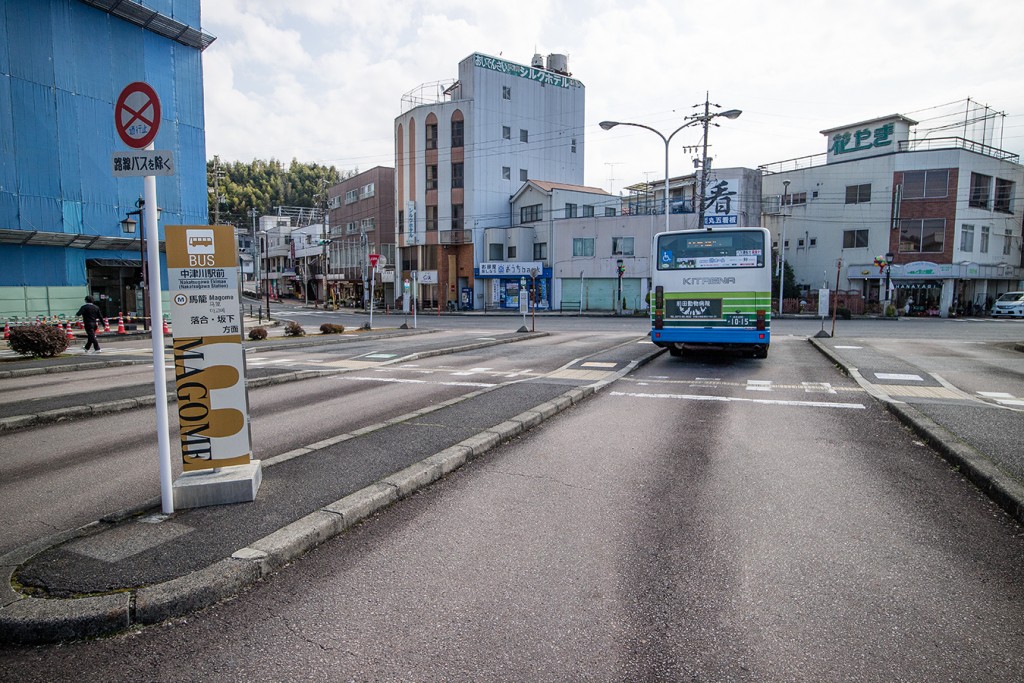 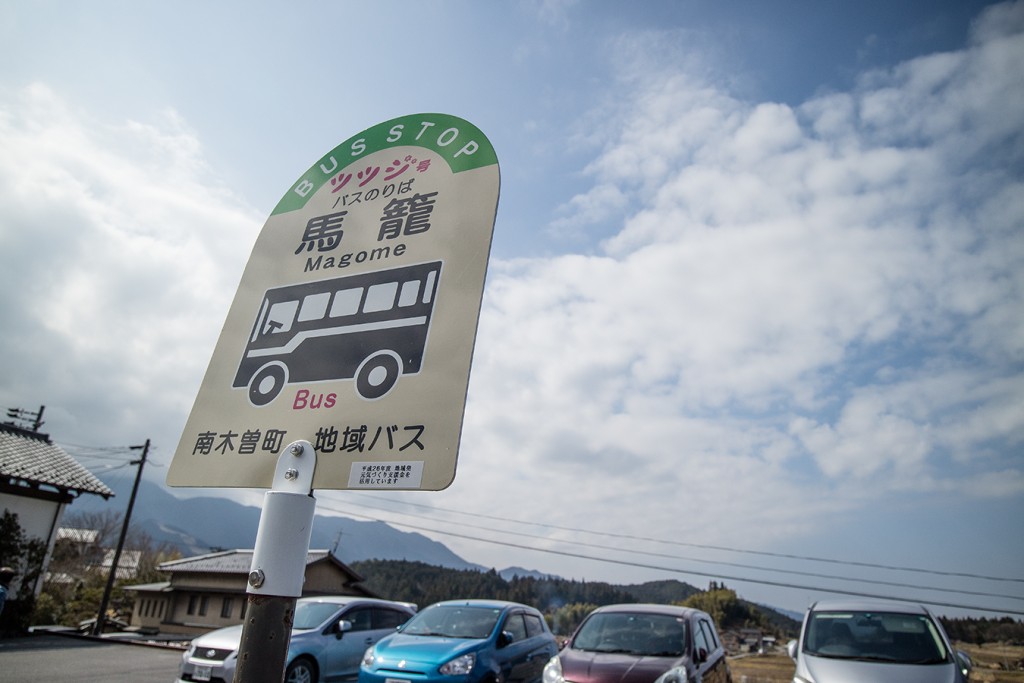 Magome (as compared to Tsumago) seems to be the more receiving point for tourists, as souvenir shops and a convenience store are lined up near the parking lot the moment you get down.  A steep incline bending twice is the first thing greeting you past the initial tourist trappy shops. This is probably the best preview of what the trail is going to be like. Since we were searching for our inn, we wasted no time dashing up the pavement along the with the luggage. The hotel was right smack in the middle of the main road, which was about 400m up the hill from where we were.  We were soon catching our breath and wondered why we had to do that in the first place. 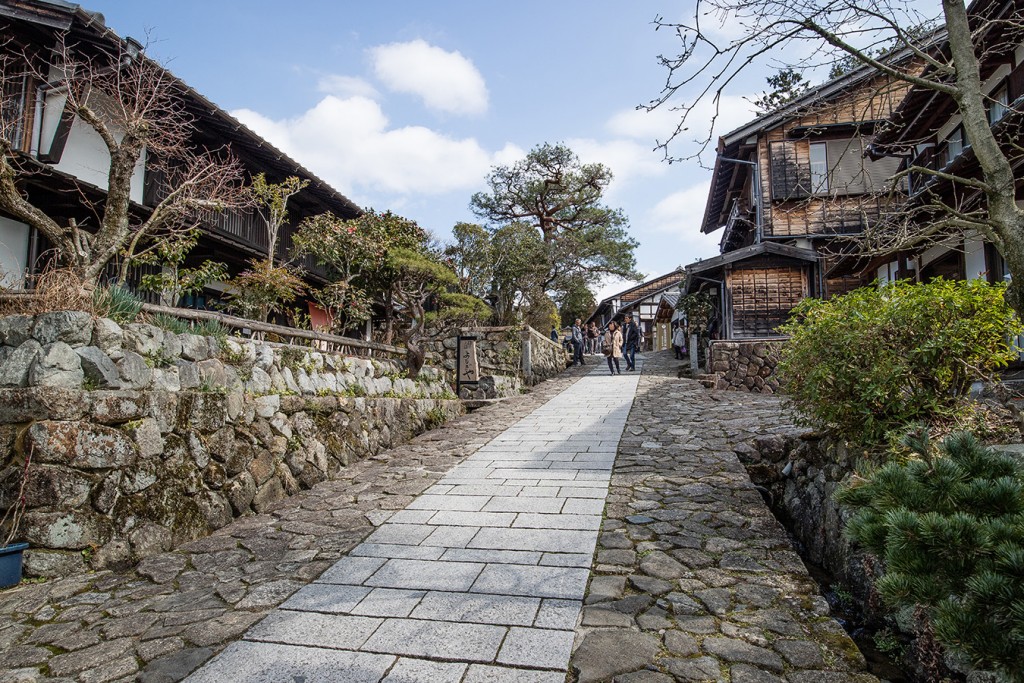 After checking in, the first order of the day was lunch and supplies for the following day’s hike. The convenience store at the bottom entrance is standard issue, but at least they got fresh produce you wouldn’t find in city konbini. Make sure you buy things before 5PM, as everything else closes down for the night. The town gets eerie quiet after that. Hence, dinner has to be reserved with the ryokan if you do want to eat there.

Magome is 43rd of the several postal towns that dot along the Nakasendo Highway. There are sixty nine (69) in all according to history, but some towns have gone to disrepair and sections of the highway are now lost to time and modernity. Among the popular ones remaining is this stretch in Kiso Valley from Nakatsugawa to Nagiso. The most common hiking trail is the 7.7km span between Magome and Tsumago. The restored paved road is the same path used for centuries as regular citizens and nobility alike went through the Magome Mountain pass towards Nagiso and eventually the capital. There are several rest points along the trail which have automated toilets and free wifi.

We took the afternoon slow and walked around town just to get ourselves familiarized with the place. Most of the shops in Magome were already slanted for the tourists, but you would encounter local wooden crafts and delicacies stores occasionally in between.

We left Magome around 10AM after sorting out our food and supplies. It was mostly a down hill path with some ups as you cross the Magome Mountain pass.

Oh yeah, not sure how cautious you would want to be, but there are warning signs for bear encounters along the trail. To ward them off, you can borrow a bear bell from the local tourist office for a deposit of Y 1,200.00. You’d get your money back once you return the bell. 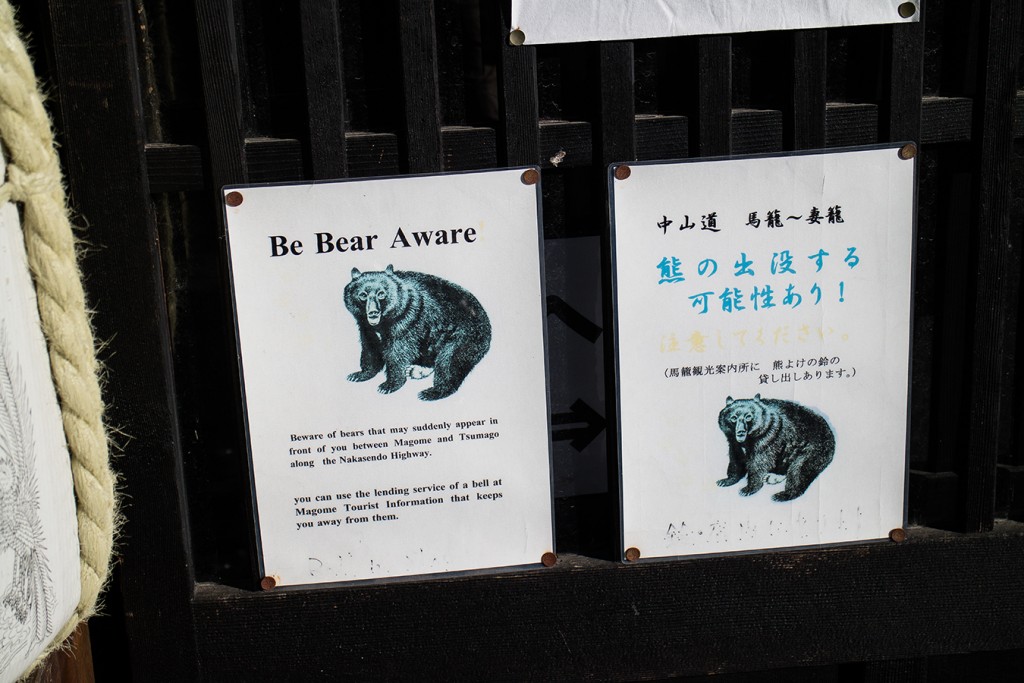 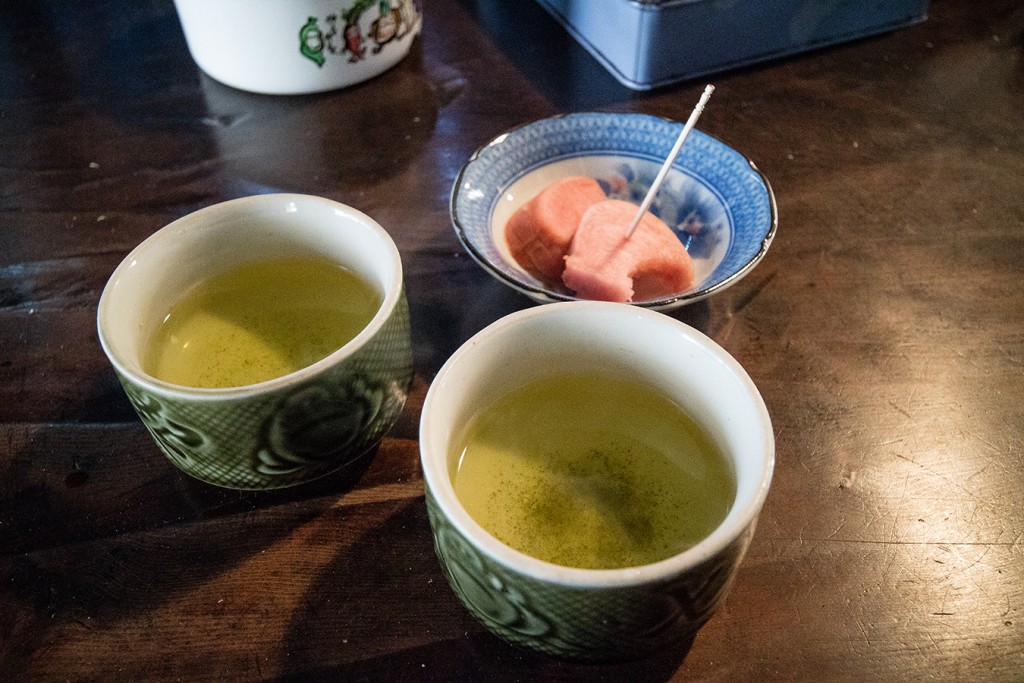 Alternatively, you can start your hike from Nakatsugawa and end up in Nagiso if you have more time in your hands. There are several baggage forwarding services that bring your luggage to the next town you’re visiting. I’m not sure if works on the Nakatsugawa-Ochiai legs, but I’ve seen posters about it on the Magome-Tsumago route. You leave your bags with the tourist information center in the morning until 11AM, and expect it to be in the next town by 1PM. Either way, you can also use a door-to-door luggage delivery service, Takuhaibin.

We reached Tsumago roughly around 1PM and walked around town. It’s like traveling back in time, but looked a bit too picturesque for my taste. Where were the people? Apparently most of the townsfolk travel to the city for work and go back by the afternoon. The ones left were mostly shop keepers with tourist-trappy wares.  This side of town only had tourists walking by, and hardly any of the residents. 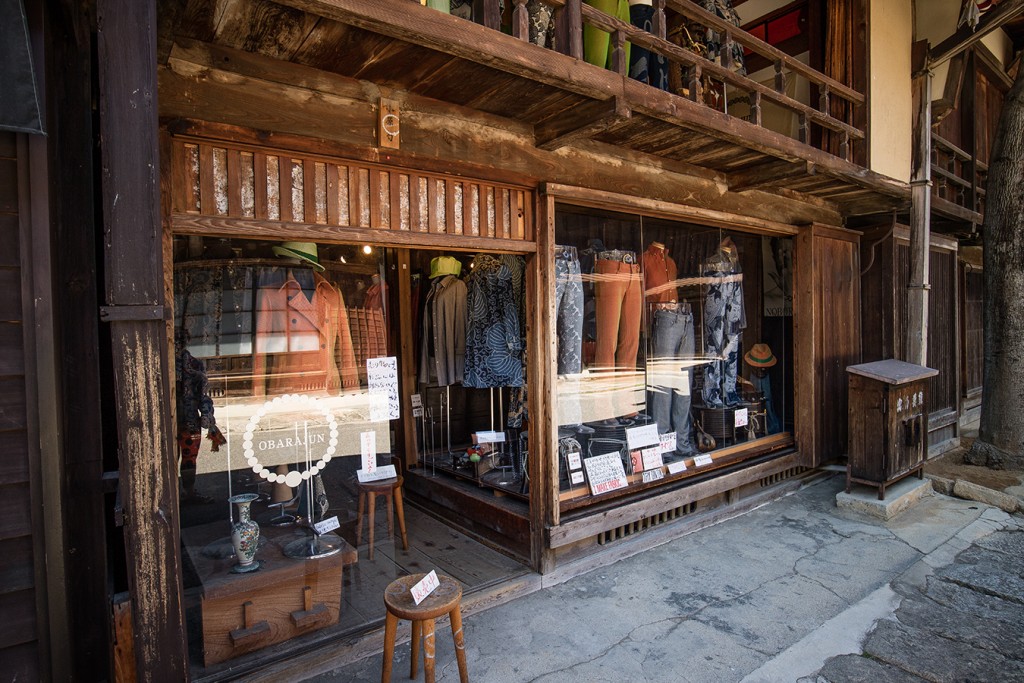 After a snack break, we didn’t stay that long in Tsumago and decided to walk it back to Magome. Having seen most of the features on the way, we already powered back knowing the 5PM deadline. It was mostly uphill going back so the ante the raised a bit. You would work up a good sweat despite the cold weather as long as you kept on walking. If you do stop, the cold would immediately get to you. 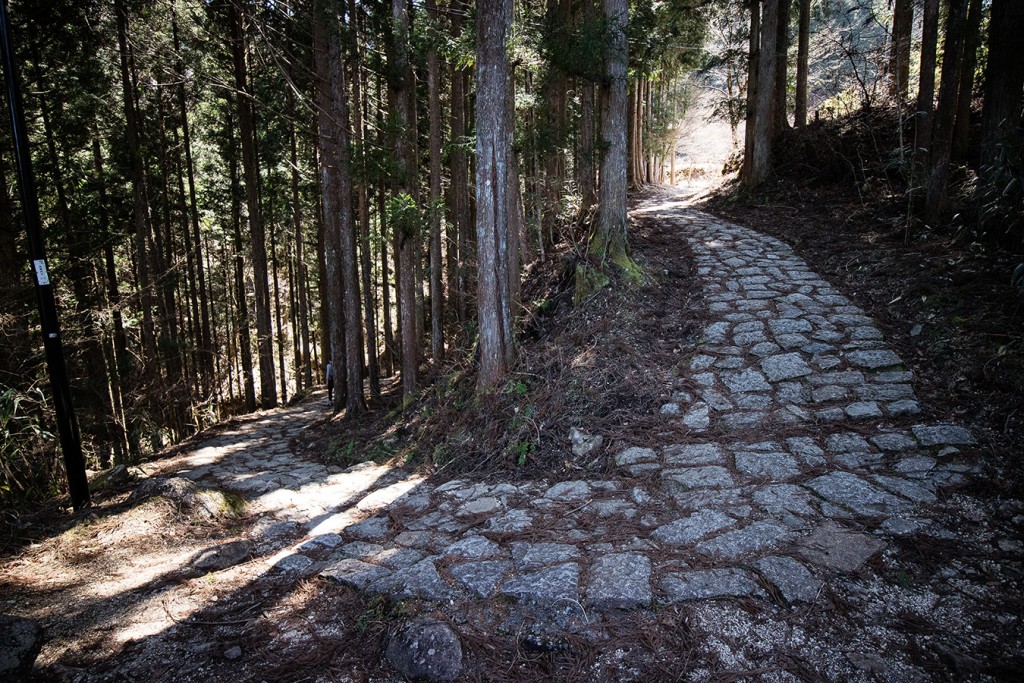 Since we didn’t stop for pictures on the return trip, we made it back within reasonable time. Reasonable meaning before the shops closed for the day.  We rewarded ourselves with some soba and anmitsu at the shops nearby the ryokan. 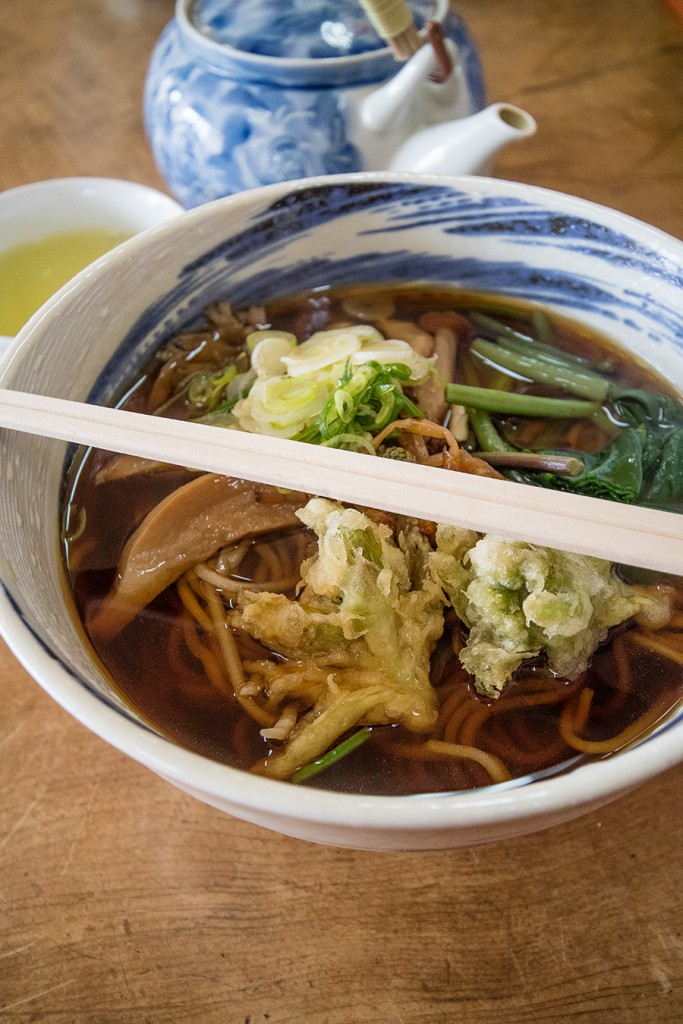 The hike left us exhausted and we were knocked out early in the evening. We left the following morning to catch an early train back to Nagoya. Luckily we caught Ate Jeng on the way out.

If you’re planning to do this same walk, we highly suggest staying at Magomechaya. They