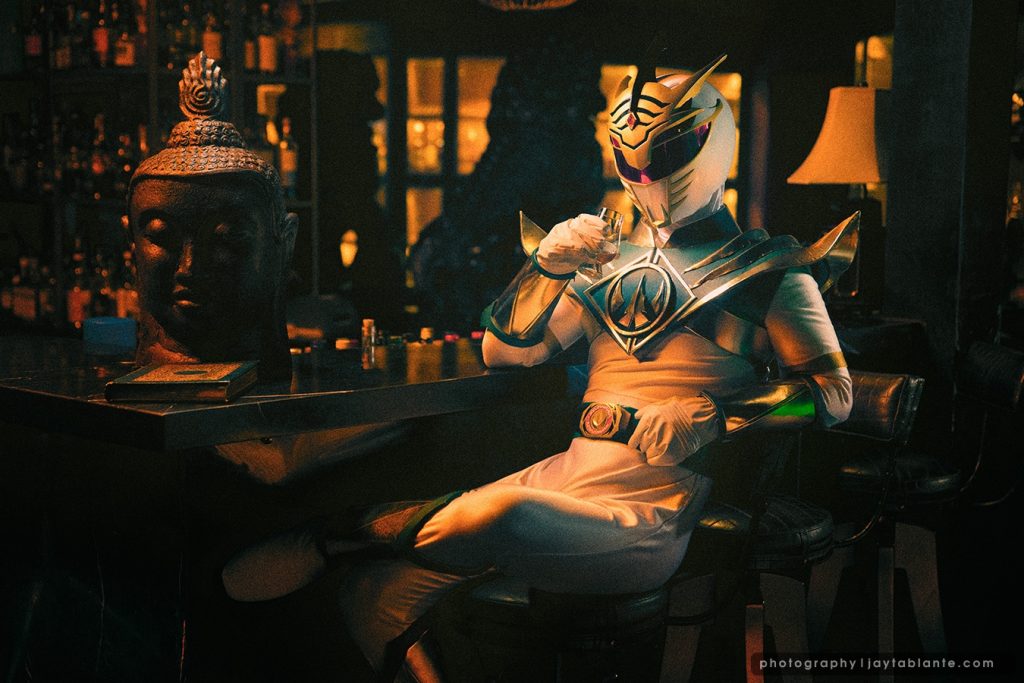 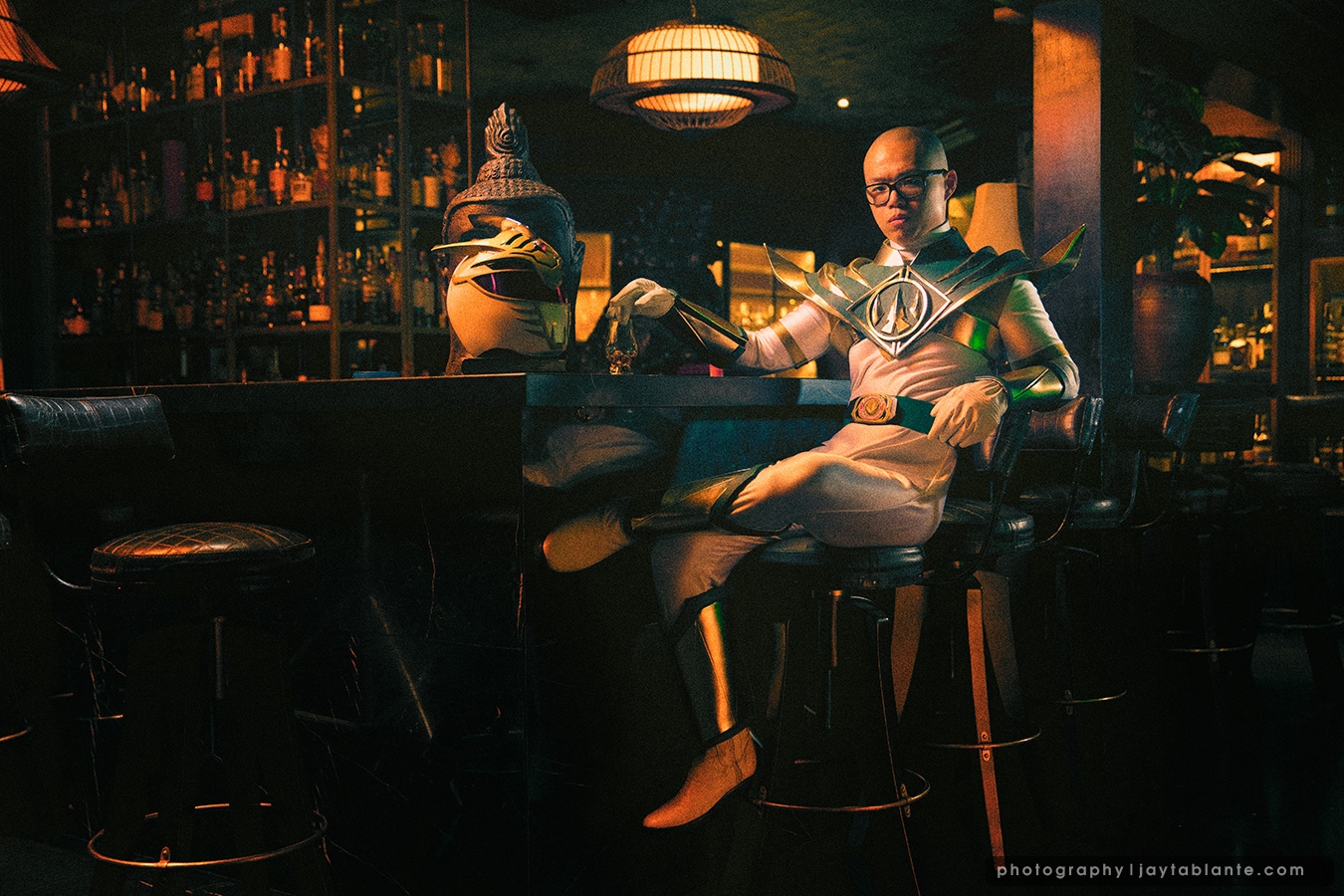 Scratch one off the bucket list! Finally got the chance to work with Chris Cantada for an editorial style cosplay shoot. It’s been awhile since I’ve shot cosplay again, so this is a welcome respite from the usual work.

I took another route from our known style, and did something a bit more editorial in nature. Minimal post-production work, and no image composition. It also helps that Chris’s costume is on-point, so there wasn’t much tweaking needed as well. If there was any Photoshopping done, I just took out the latches from the helmet and the opening where the helmet splits.

The challenge working in Mandalay is replicating the same feel of the venue into the photograph. It’s dimly lit, yet you want the cosplayer to stand out. I had to dial down my lights to their lowest power, and soften the spotlights. I can’t spread out the lighting as much or else it would appear too bright. I added some ceiling bounces with orange gels to help push the warm feel of the place. Overall, I used about four (4) lights for this image.

We just wanted to imagine how this new evil Tommy White Ranger would chillax after long day’s work being a villain. 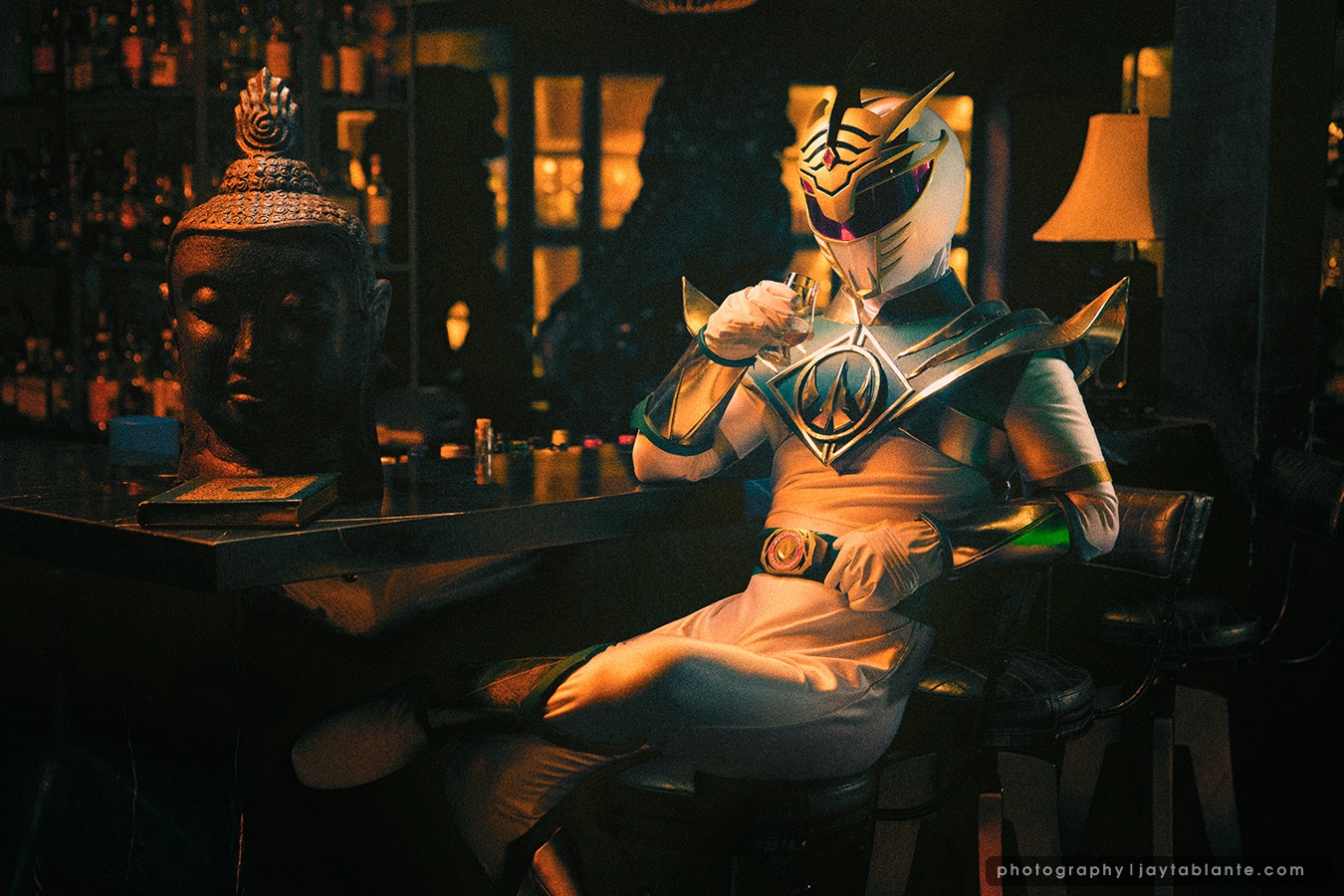 I also had the chance to sit down with Chris over drinks (pun intented over this image), and chat with him about his passion for the Power Rangers.

I know you have been asked this numerous times, but for the sake of those who haven’t read up on your history… how did you end up doing costuming for Power Ranger shoots? It’s quite a change in career from music.

Ever since I was with Sponge Cola, I was very open about me being a Geek. I collected toys and wore Star Wars costumes. But what happened with me going from hobby to a more professional capacity was just a happy accident.

A few years ago during the 20th anniversary of Power Rangers, I started to rekindle my passion for the franchise. I was always a fan since I was a kid, but I never wore the costumes because I was overweight. And tight costumes on a chubby boy was not something I wanted my classmates to tease me about! So when the Power Rangers hype was all over my news feed, and I wasn’t overweight anymore, I decided to finally have a costume made.

But having a Power Rangers costume wasn’t enough. To make it legit, I figured I needed to have a “morph” video! So that’s what I did with my phone camera and iMovie. Something very crude and amateur like, but gets the job done. Let’s just say people liked watching those types of videos. I made more videos over the course of that year. This time though, I tried doing cosplay fan films. I slowly realized I stumbled upon this niche group of people who really supported what I did. Fast forward to today, with over 250 million views on my channel, I’m very much happy being a professional Geek.

The costumes are pretty intricate, how long does it take you to produce a new ranger?

I have these suits and helmets made by different and talented costume makers. But the one guy who made most of my stuff is a local maker named Kamen Rider Nimoy. It usually takes 2-3 months to make, since he has other clients.

How many of these helmets do you currently have?

Right now, I have about 10… and counting. Haha!

Do you get mobbed at cons even out of costume?

Haha, “mobbed” sounds like something that can describe Alodia Gosiengfiao’s con life. But for me, it’s just very casual. They usually come up to me just to say they like my videos and cosplays. 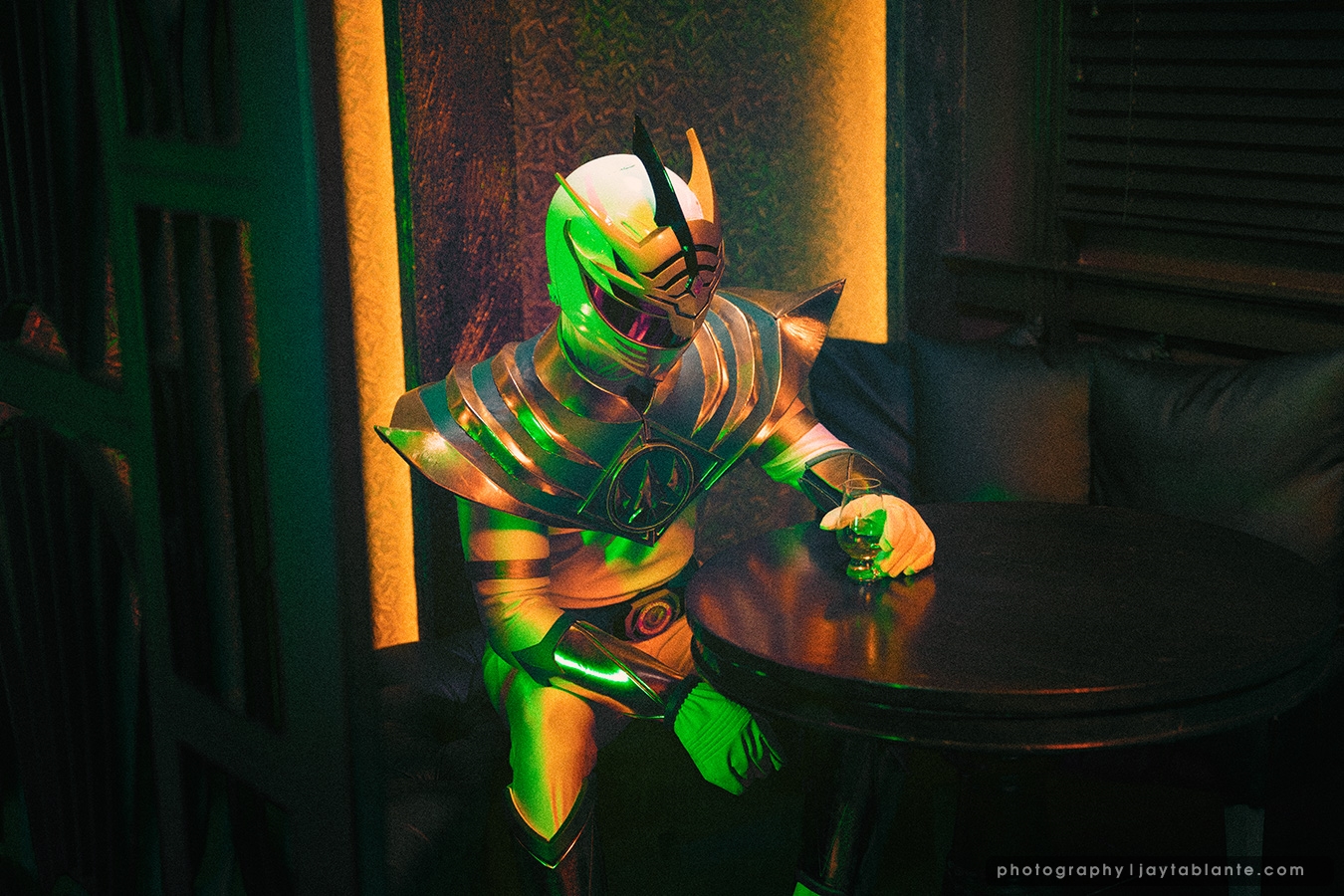 What as the craziest thing a fan ever did to you? If there was any somebody crazy.

Nothing crazy! But there was one endearing instance when I was in a restaurant with my wife. There was this little boy who came up to me with his mom and asked for a photo with me. The mom had no idea who I was obviously! My audience is really in that age group of kids, around 8-15 year old boys. Times like those really make me enjoy what I do.

Would you suggest picking up babes in a Power Ranger outfit? If so, how?

HAHA. If you have a nice body wearing the spandex suit, why not? You can even come up to her, ask her for the time and when she replies you say, “No, it’s Morphin time…” HAHAHA!

If you had a chance to invite one of the Power Rangers to guest on your channel, who would it be?

I was actually fortunate to have five Power Ranger actors guest on my channel, three for fan films and two for official interviews. I’ve had the Original Red Mighty Morphin Ranger (Austin St. John), the Red Space Ranger (Chris Lee), the Blue Dino Charge Ranger (Yoshi Sudarso), the Yellow Mighty Morphin Ranger (Karan Ashley), and Zordon himself (David Fielding). It’s a great thing when the people involved in this show actually recognizes your part in promoting the franchise in a positive way. That’s the best feeling. 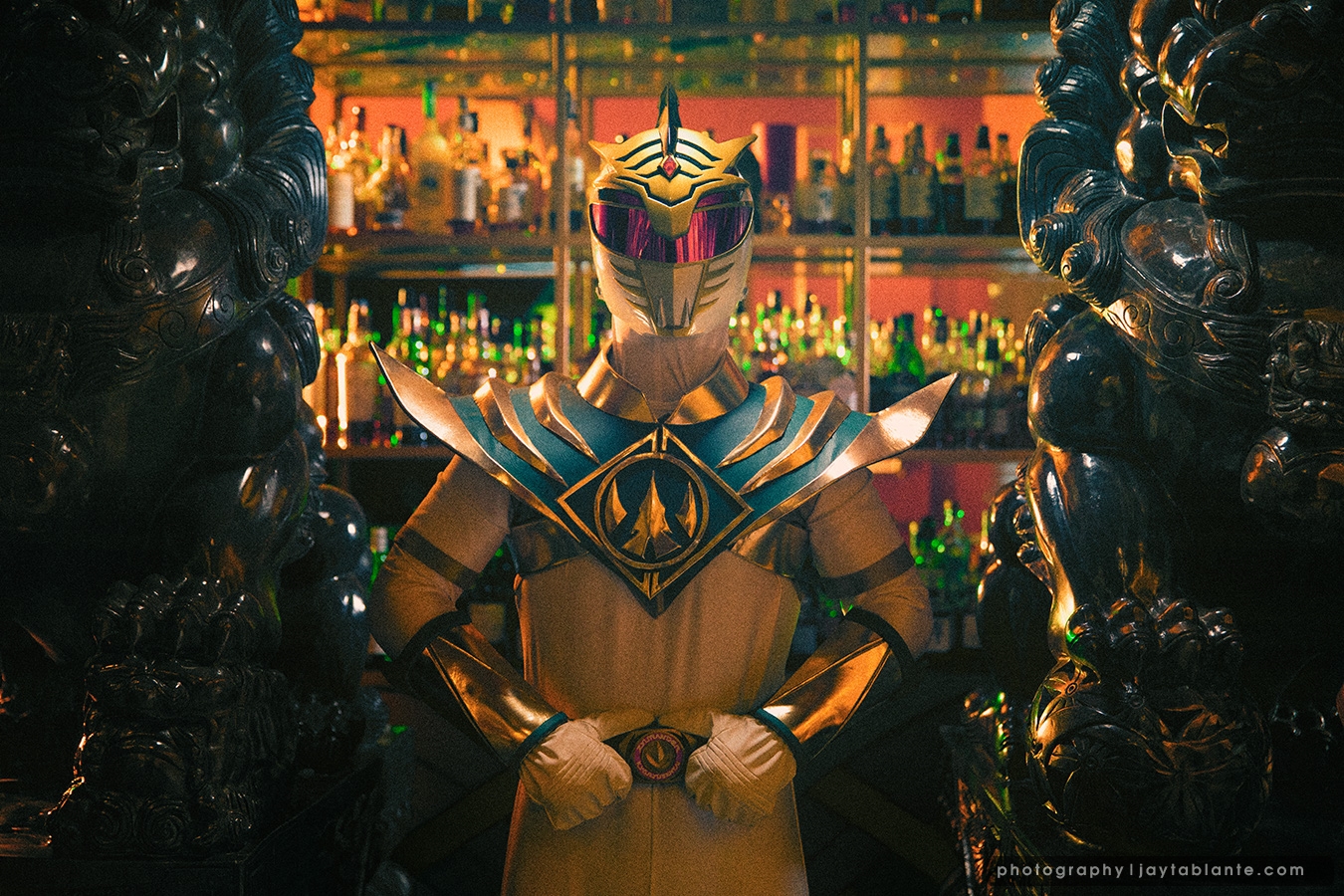 Just had an absolute blast shooting with Chris this afternoon. For the heck of it, we even did some extra outtakes outside on the street in a nearby Jollyjeep. It’s not everyday when you see a Power Ranger walk around the streets of Metro Manila. 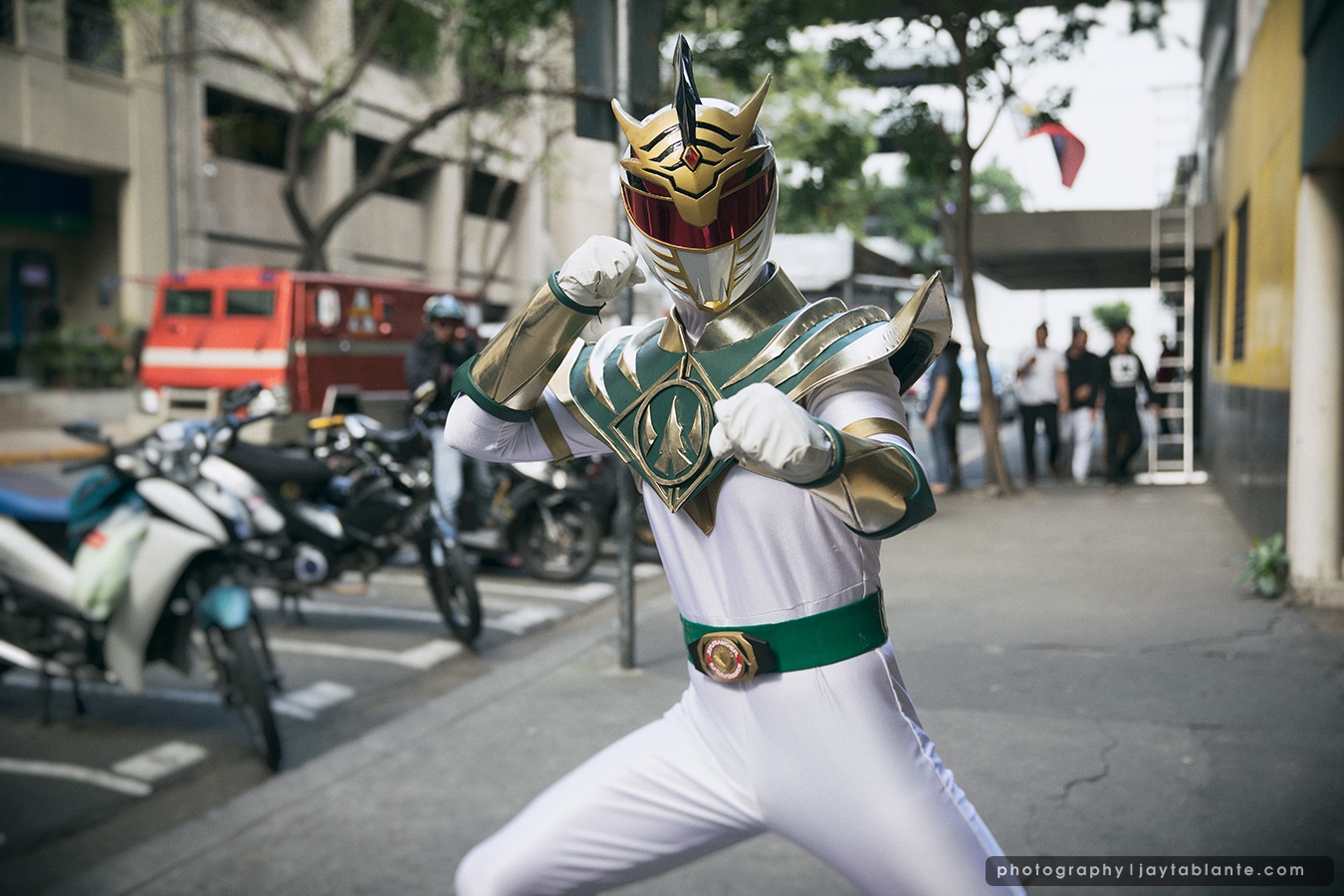 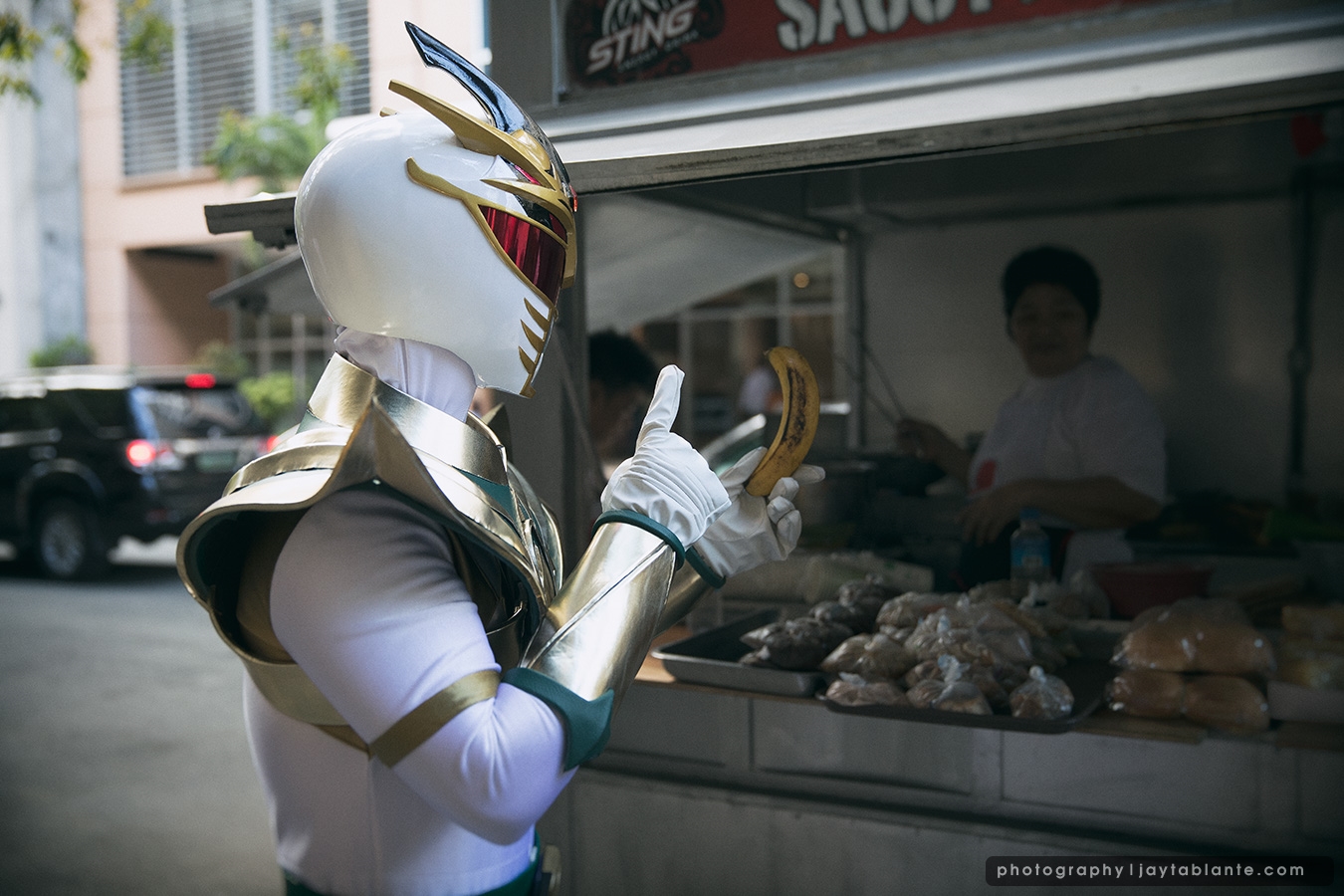 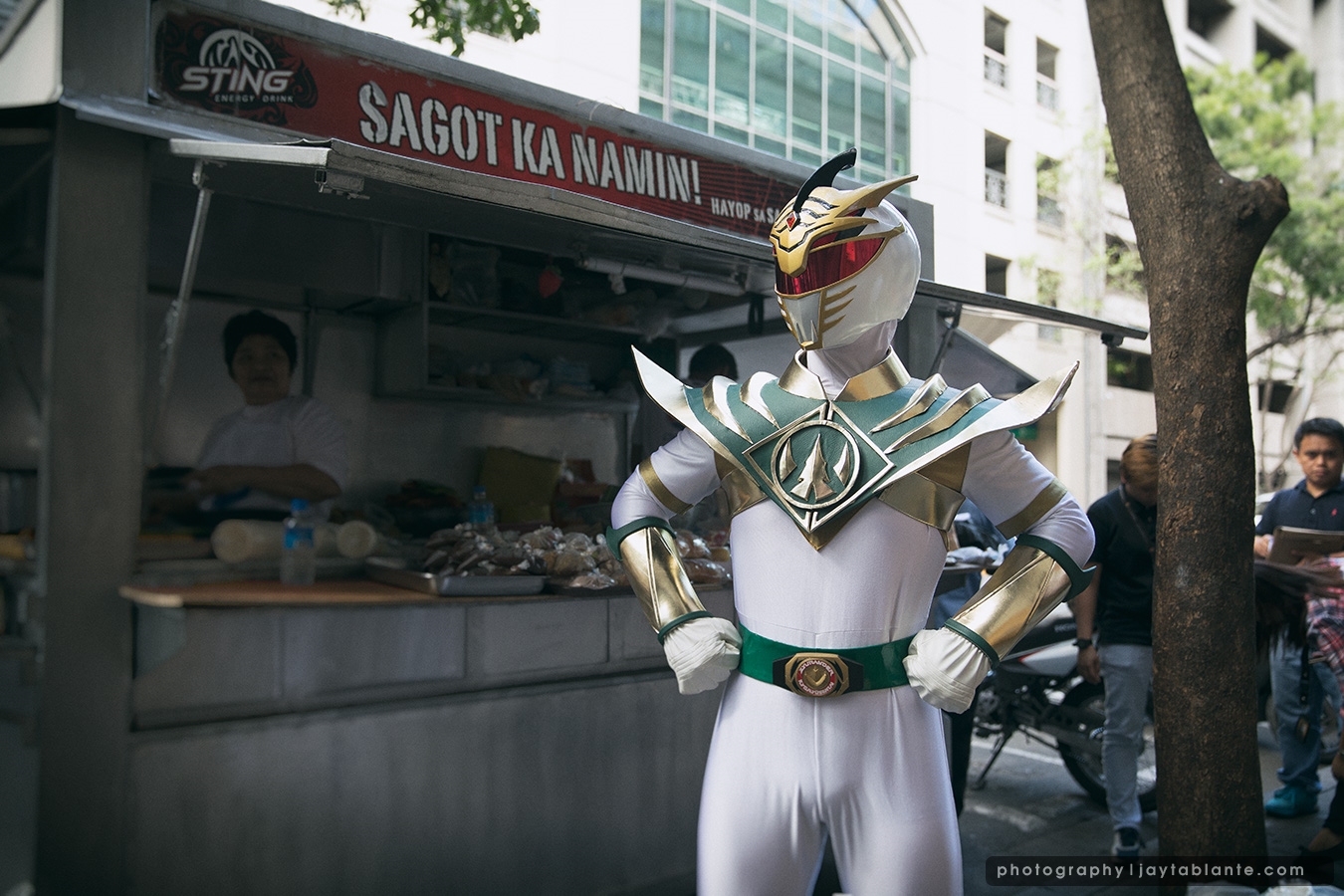 Of course this entry wouldn’t finish without behind the scenes. Watch how Chris and I ended up shooting together.

We would also like to thank the guys from Mandalay for allowing us to film and shoot at their awesome location. If you want to watch more of Chris’s videos, check out his social media details here: